You are currently browsing the daily archive for October 3, 2008. 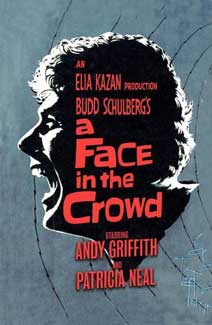 There’s this funny scene in You’ve Got Mail when Greg Kinnear’s character, Frank Navasky, is considering a topic for a book, and he says he’d like to write, “Something relevant for today, like the Luddite movement in 19th century England.”  Well, today’s spotlight is a bit like that.

Even though A Face in the Crowd came out in 1957, it is highly relevant to today, tackling issues like the power of celebrity, television ratings, and the Madison Avenue grooming of presidential hopefuls.

Andy Griffith plays – brace yourself my friends, this isn’t Mayberry –  Lonesome Rhodes, a drunken, womanizing, self-serving conniver whose meteoric rise to fame and power starts from a jail cell where he’s been arrested for drunken and disorderly conduct.  Complete with boyish good looks and a devilish laugh, he’s a force to be reckoned with.

The lovely Patricia Neal (that voice!) plays Marcia Jeffries, the woman responsible for his discovery.  Despite Lonesome’s wicked ways, Marcia remains loyal and protective, until her own sanity is at stake, forcing her to make a very daring choice.  Also cast is the young and handsome Walter Matthau (seriously – great glasses too!), playing the clever and equally devoted, though not to Lonesome, Mel Miller, Marcia’s savior.

With the exception of being filmed in black and white and Patricia Neal’s occasionally over dramatic hand getstures popular at the time, the movie really feels like it could have been made today.  The dialogue is razor sharp and the characters achingly real.  It is surprisingly racy, too – drunkenness, premarital sex, extra-marital sex, all this for 1957!