How I learned to say s#*t in French, and oh, Happy Mother’s Day! 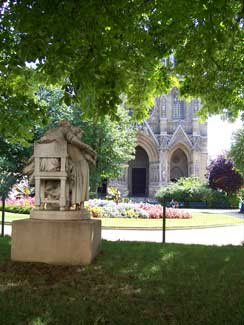 Madame Augden, my junior high French teacher, was a patient and thoughtful lady, always going that extra mile for the class.  One year, she decided that we should make Mother’s day cards.  She brought scissors, construction paper, markers, and various other craft supplies for each of us to make a masterpiece in honor of mom.  It was a very sweet idea, actually, but, as with many such notions from the minds of well intentioned teachers and into those of crazy teen age girls and boys, it went slighty awry.

The word for mother in French is mere and the word for day is jour, but silly kids that we were, we kept going at it in Franglais combining mere with day, and at a rather fast clip, so in the end, it sounded like mere-d.  Happy Mere-d, Madame Ogden!

Upon hearing this, Madame Ogden looked at us with a horrified expression.  We could not fathom a reason.  We were happily repeating mere-d in sing song voices while cutting out hearts and flowers, and aside from being a bit boisterous, we were generally doing as well as a class of junior high students could.

Then she told us, her voice serious, knowing full well that this little bit of knowledge could be dangerous.  You see, merde is that other word, the one with the # and * in it, and if you say it aloud, you’ll hear how close we were.

We were stunned by the information.  How could she say a curse word in class?  How could that word be so close to mother?  Those crazy French!  Then we each repeated it aloud a few times while she looked on in terror, certainly wondering if some sort of melee would ensue.  In our defense, hadn’t she given us permission?   Luckily for her, the fervor died down after a few minutes and we returned to our cards, proud of our new found knowledge.

After that, I never used it against her, but did tell my friends in rather hushed tones, books to my chest, “I know how to say s#*t in French.”

But, that is only the beginning of the post.  I started out wanting to write about my mom and wish her a happy Mother’s day, but as is very often the case, I was waylaid by my own thoughts.

These are some of my fondest memories of my mom:

Hanging laundry on the clothesline

Being home every day after school

Having an after school snack for me, even in high school!

Telling me what I was like as a baby

Kids at school saying, “Your mom is so pretty!”  Me knowing it was true.

Watching her write – she has beautiful cursive

Running from the cold, air-conditioned grocery store, to sit for a moment in the hot car, windows rolled up.

Admiring her homemade birthday cakes – they were the best!

I love you Mom and wish you a very happy day…