You are currently browsing the archive for the Feeling category.

I am exhausted by the ill behavior of others. And to cut anyone off at the Greg Cooper pass, definitely not his. I promise! We are better than a-okay.

Truly good, lasting relationships result from doing the work to make them so. Everyone must take full responsibility for their actions, so if someone hurts you, tell them. Set boundaries if you need to. Do not assume they know you are upset or give them the silent treatment until they guess. This is passive-aggressive immaturity in action.

Additionally, no one should automatically know you are sorry for your actions. People are not mind readers. You need to actually apologize, genuinely, whatever the circumstance. Express exactly what you did wrong and how you intend to do better in the future. This is required even if you didn’t mean to hurt someone and maybe the most difficult to recognize. The pathway to hell is, as they say, paved with good intentions!

Finally, sometimes the hurt person may decide the relationship is no longer worth it, too much water under the bridge. This is entirely their right. No one else gets to decide, and anything along these lines is an attempt at control. The same applies if years have gone by and the hurt person still does not wish to reconcile. Don’t try to shame someone because you want your family or friend group back. Succumbing to your desires does not make them a “better” person. It makes them abandon their security and principles for your comfort. As challenging as this is, give your heartbreak over to grief and make every attempt at healing the loss.

Saying all of this in such a matter of fact fashion does not belie the fact that this shit is hard. How lousy is it to be the one left behind (personal experience!), to wish we behaved better. By that same token, it is far easier to wallow in our sorrows, failings, and anxieties than address them directly, maturely. Admitting fault is scary! The beauty is, with every breath, we have another opportunity. The choice is ours.

It’s Okay to be Gay

Perhaps for the first time in my life, I am rife with simultaneous relief and grief. Relief that the shooter was subdued so quickly, grief at the death and damage done. Club Q, the site of my beloved country’s most recent mass shooting, is in Colorado Springs, the city where I live. Greg and I saw our first drag show there, which was amazing: make-up and singing and serious dance moves, but not by us, ha! We were out to support Queen Potted Plant, a friend in town.

At the time of the shooting, Queen Potted Plant was there, celebrating her birthday, her boyfriend, too. She is safe and as okay as one can expect after witnessing such horror. He did not survive. The handsome bartender, Derrick Rump, sweet and kindly maker of our drinks, died.

These are the names of the remaining victims, with love and light to all of their loved ones:

I would also like to mention, with a heart full of gratitude for preventing more loss of life, the heroes who attacked the shooter:

My heart is so heavy. No one knows if this is an actual Hate Crime against the Club Q Community, but a body doesn’t enter a place of acceptance, joy, and celebration to commit murder without some sort of hate in their heart.

Because seeking answers is one way of processing my grief, and because there has been more rhetoric than usual aimed at gay people (I’m looking at you, Florida), as of late, I got to searching and wondering. If you are reading this and harbor fear about the Gay Community, what happened for you to arrive at this place? Do you actually know any gay people? Have you been hurt?

If you believe, as I read in several comments, that this was God’s will against gay and trans people for harming children, I must ask, where is the science-based data? To the contrary, I found The Southern Poverty Law Center has a list of 10 Anti-Gay Myths Debunked, which further substantiates my belief that the chance of a child being hurt by a random gay or trans person in a bathroom or a Drag Queen at story time is far less likely than trusted Pastor Bob at church. A few examples:

More food for thought from a piece in Religion News, quoting several studies:

Those who sexually victimize children likely have victimized dozens of other children during their lifetime. Not only does this open our eyes to the prevalence of this tragic epidemic, but it should also help to equip us to respond to individuals within our faith community who get “caught” for engaging in criminal behavior against a child and beg for “grace”, claiming that this was the only child they have ever victimized. Based upon these statistics, the offender is most likely lying, which means they are continuing to deceive in order to reestablish trust and access of our children.

I was also very disappointed to learn children are even unsafe on U.S. Military bases around the world, especially at the hands of other children, which circles back to the previous statistics, unfortunately.

Finally, and not surprisingly, I must also mention, if the ultimate goal is to protect children from harm, we must enter guns into the equation. According to the Children’s Defense Fund, in 2019, guns killed more children and teens than cancer, pneumonia, influenza, asthma, HIV/AIDs, and opioids combined. Sadly, for every one of these children, another five were injured by guns. More preschoolers were killed by guns than police officers in the line of duty.

This is where I leave you, but not without a prayer that we may all experience love and safety: young, old, trans, gay, and straight.

This morning’s walk – a frigid one of icy sidewalks, red cheeks and noses, and beautiful skies. Winter has yet to loose the weather reins, but in these drought filled times, I’m glad for whatever moisture is delivered.

Red chile with chorizo, delightfully topped and dipped. Oh, and one of my best-ever margaritas. Birds of a feather and all.

I think this is going to be on the frequent dessert rotation list. It’s a very crave worthy gelatin, yogurt or sour cream, and cream cheese no-bake cake that whips up lickety-split quick. Since I am not terribly fond of cheesecake crust, I left it out, and it reads more like a wonderfully silky pudding, with minimal sugar. I love how any topping would make it shine. These are blueberries. Bananas and peaches forthcoming.

The hubster got a new job! As always, I am proud to be his #1 gal and cheerleader through a pretty exhausting process. We’ve decided that many tech companies, when interviewing, are more keen on what a candidate does NOT know than their actual strengths, both in software development and as an individual, relating human to human. Kinda sad. The very cool socks were part of a fun welcome-to-the-company swag box.

Carrot ginger soup with turmeric cream. I find it very curious that super orange carrots turned such a neon shade of yellow.

This isn’t the prettiest in the land (see carrot soup above) but boy was it delicious! It’s a fish chowder (shrimp, clam, sea bass) with the ultimate chicken-style dumpling lily-gilder. More, please.

Simmering. The word that describes my rage. I have not spoken of this latest incarnation because I needed to wait. Wait for my disbelief and wonder at the actions of the worst president of my lifetime in our nation’s capitol. Of people in positions of power in my own state harming peaceful protestors.

I wrote this post almost FIVE years ago, with much hope that by now something positive would have happened for my brothers and sisters of color. But yet, here we are. This time, maybe? Please. Please. Because unless and until Black Lives Matter, the expression All Lives Matter (uttered by the clueless and privileged) holds NO currency. Because a life that truly matters is not held at the neck by an oppressor while three others in positions of authority blithely look on or, worse still, aid in holding down his body. 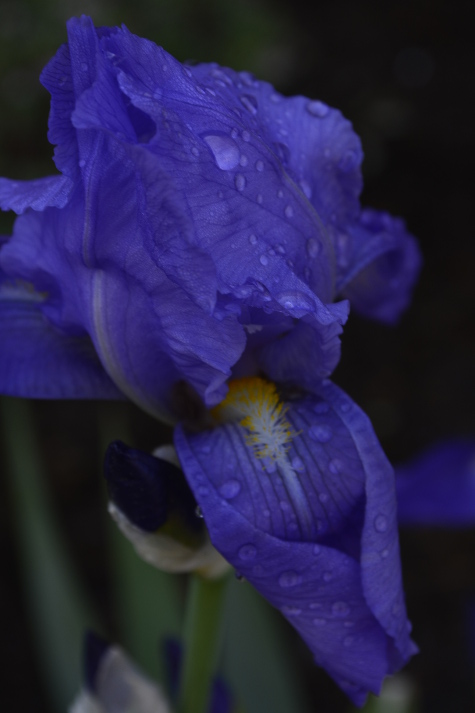 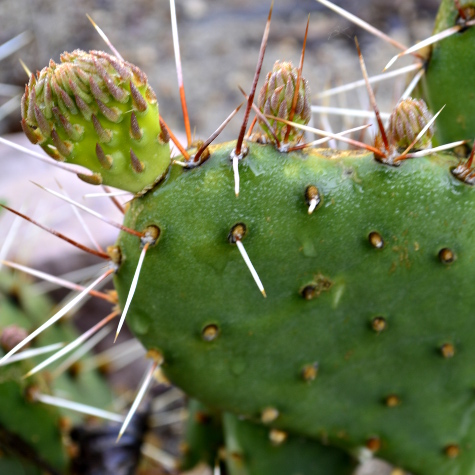 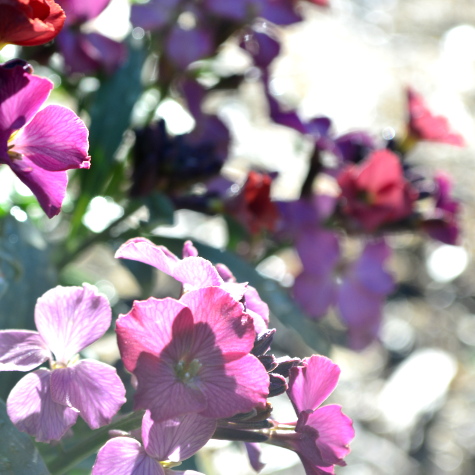 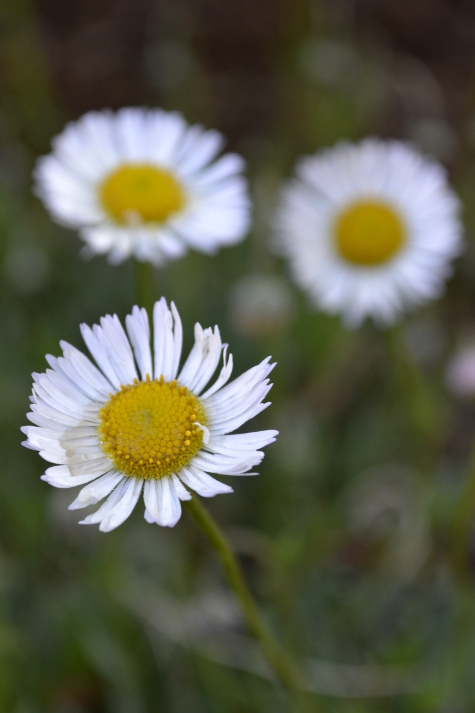 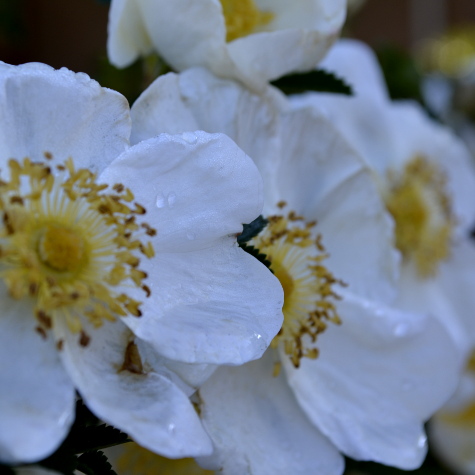 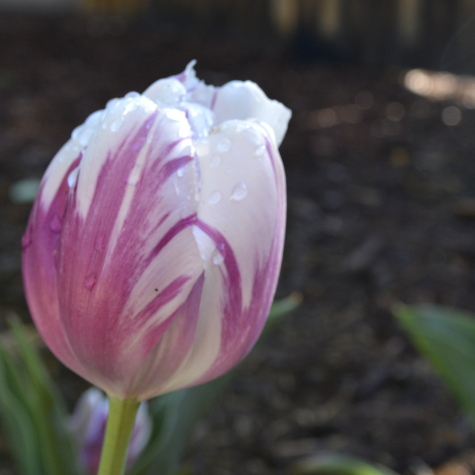 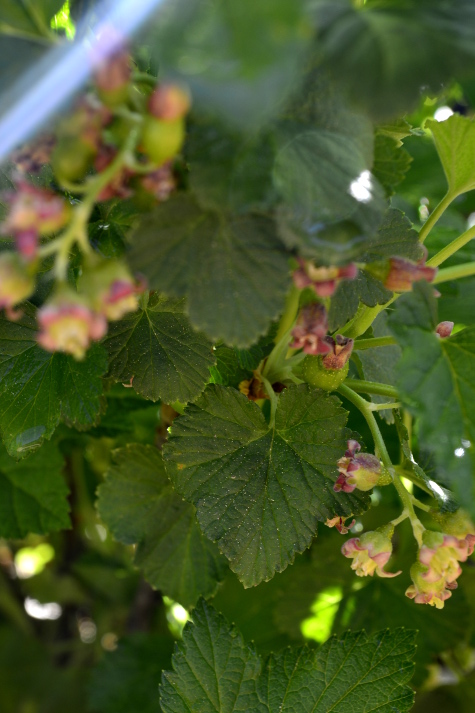 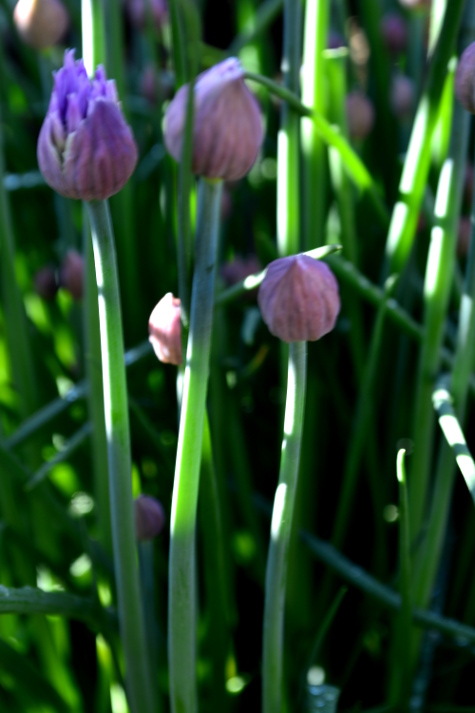 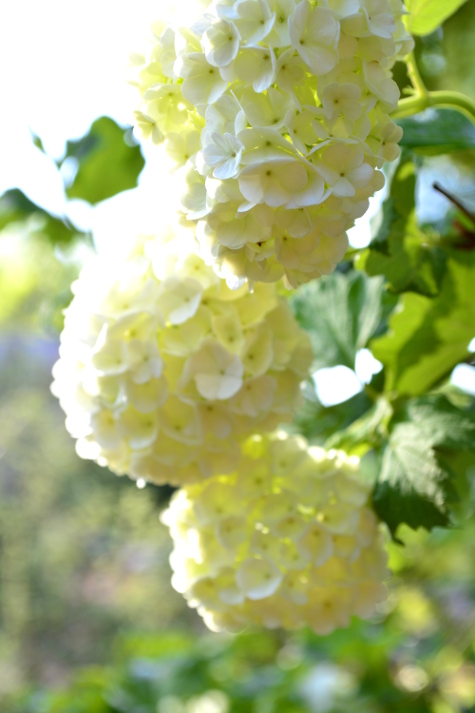 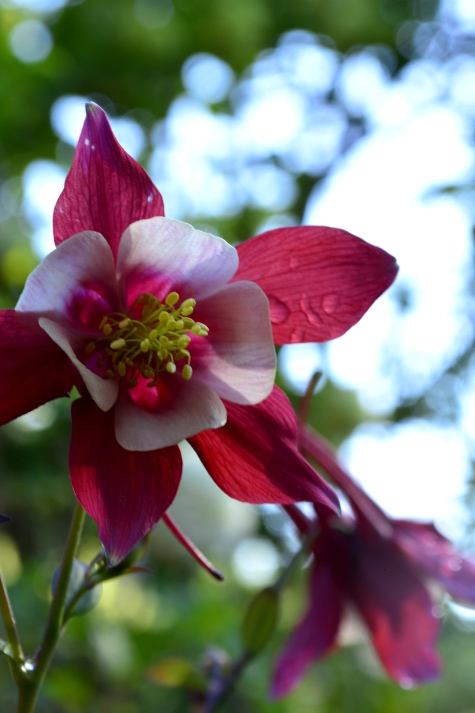 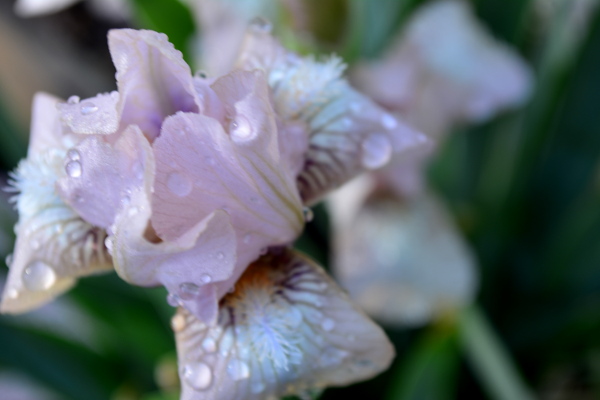 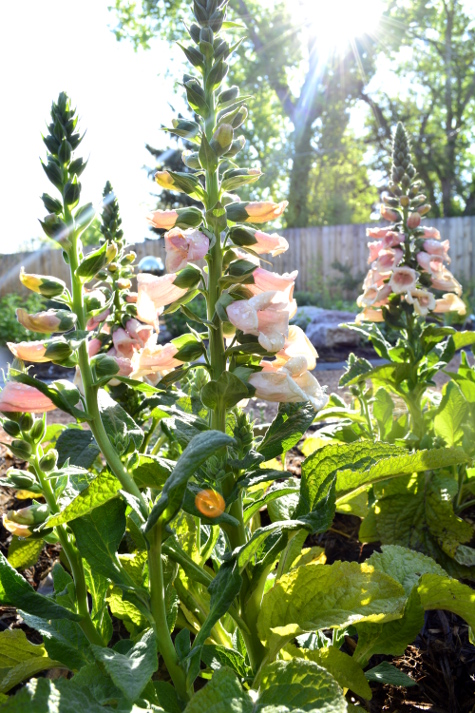 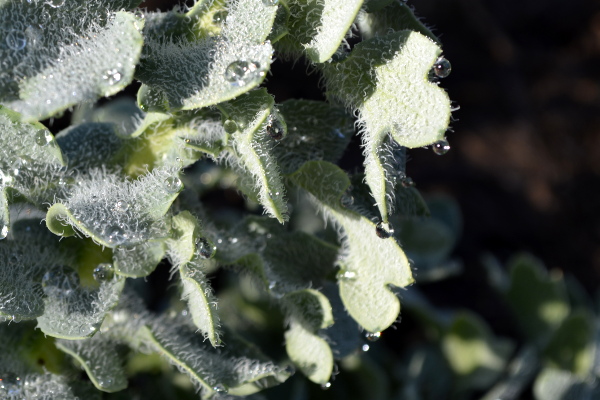 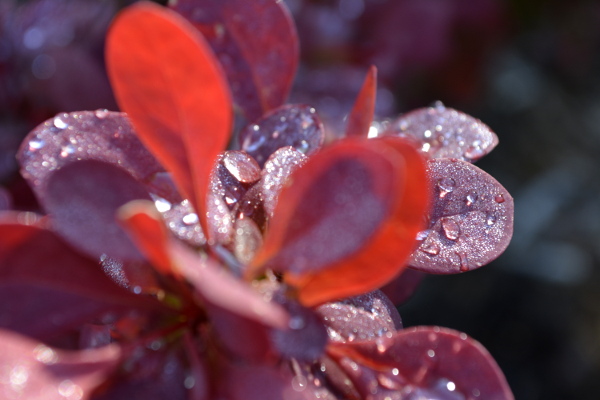 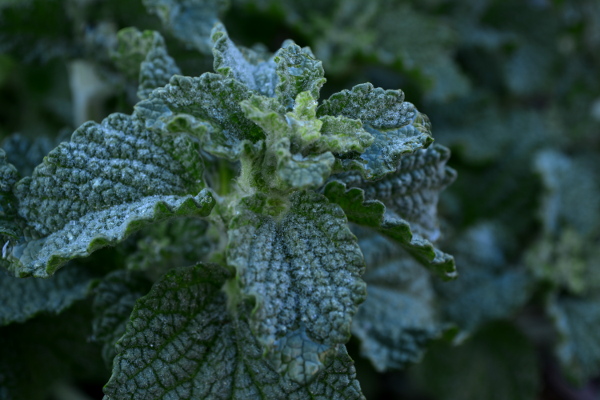 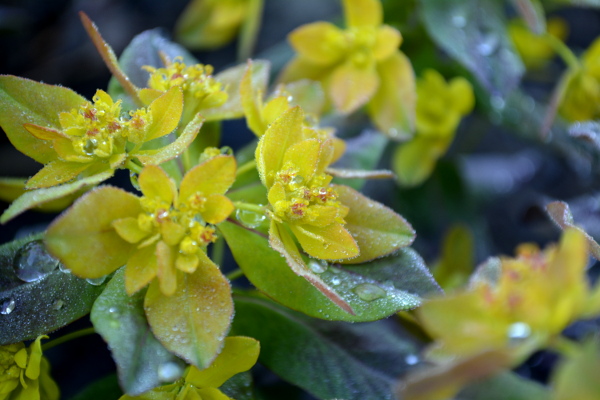 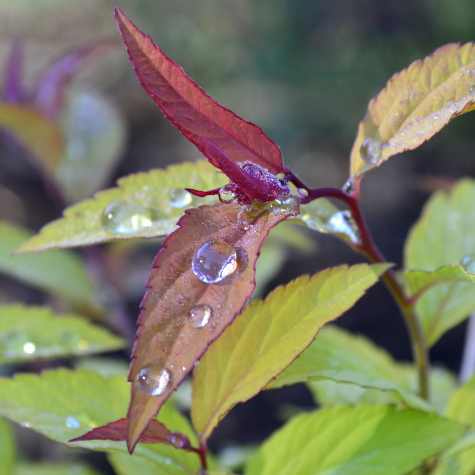 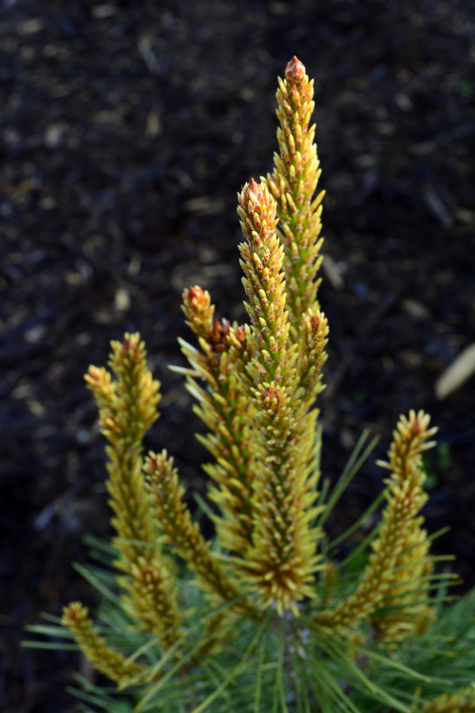 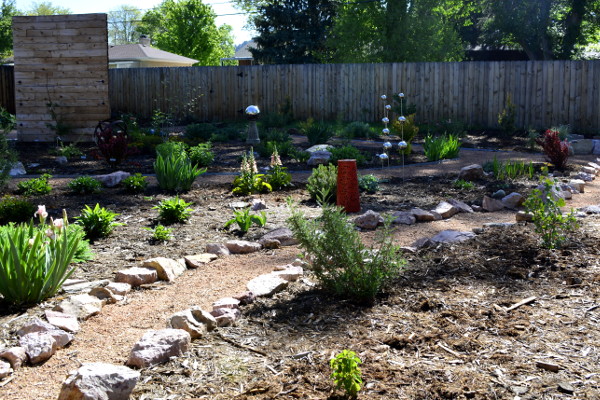 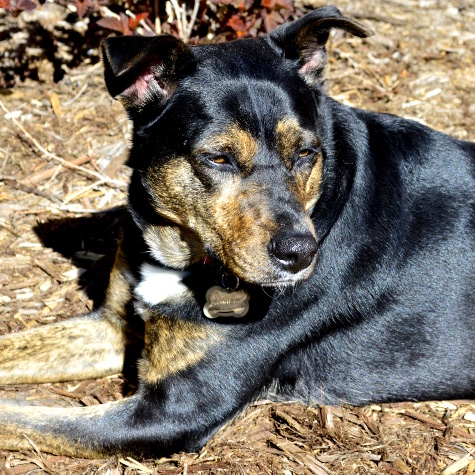 All the blooms to greet me yesterday morning and some greens, too. Not every beauty is a blossom. How I love this space and this patch of earth that is ours, no strings, save those attached within our hearts. Sometimes, when the city noise rattles uncomfortably beneath my skin, I ponder leaving for more solitude, more quiet, but then I list all that I love – Palmer Park a quick walk, downtown the same time via car, a little longer on the bike, and all our wonderful neighbors and growing things, I know it isn’t terribly likely. How my heartbeat quickens to witness the lodge pole climbing skyward, leaves in a slow motion unfurling, the coming of green, green, green, and every color of the rainbow. Home.

And how I look as I sit mesmerized, t-shirt, ponytail, no frills. An hour spent gazing. wearing my Grandma glasses, as Greg calls them, because I remind him of her when I wear them. A favorite hat, bought in New Mexico, of course. My best canine companion. And that light!!