You are currently browsing the monthly archive for August 2012.

It is with great excitement and pride that I offer to you, for the very first time, my novel,

In a small Oregon town, the widowed Sharon connects with her long-dead husband via secret acts of sabotage, of the variety that are meant for good, not ill. In this same town, Serena, a girl of ten, happily lives with her grandmother, her parents on the fringe of her life, giving money, books, and little else. Out of the blue, Bob Barker of The Price is Right fame begins to visit Serena in her dreams, providing glimpses of the future and the past, and uniting her with Sharon the saboteur. The pair forge an unusual friendship, and everyone’s eyes are opened to the truth they already know and a larger world, one filled with daring and a little danger, kindness and cruelty, and a rather dashing assortment of vintage automobiles.

It’s a little story that contains my heart and soul.

It’s a funny thing, writing a novel. It is my essence, but it isn’t me. I have lived it: driven, walked, and pedaled the roads. I’ve heard the music and felt the joy and pain. I am every character, yet I don’t know them fully, don’t know exactly what motivates them, why they are unerringly kind and goofy or cruel and distant, despite my silent pleas. I remember reading something similar in an interview, years ago, before I ever flirted with the notion, before I met a writer at a party and was gobsmacked by his insistence that writing was what I ought to be doing, not what I was.

How do you not know what is going to happen next? Your hands are moving, whether by pen or keyboard. It’s not magic. It’s you and your creation. That is what I didn’t know. That there is a certain alchemy and, perhaps, the hand of God, Buddha, Krishna? Things happen. Marvelous. Unexpected. Dazzling. Sad. I didn’t see them coming, but there they were, sparkling jewels before my eyes, and I worked with mad fury to capture them with the clarity in which they first appeared, to pay my proper respects to that flood. And I believe I did. I hope you agree.

Some words on books and publishing:

When you press that “Buy Now” button and see the price of the book, $32.00, know that I am not trying to make a king’s ransom from your kindness. If you’ve been here awhile, you know that’s just not my style. The truth is, books are expensive, especially when they are made in small quantities, and with the detail and care I feel my story deserves (a shout out to Smith Printing for their awesome work). I wanted something I could proudly offer to you, beautifully bound and embossed with fine paper that honors both the words and images. My cost is $20 per copy. It is my hope that I can sell enough to pay off my investment, and my darlin’ Maren for her drawings. The rest is for fees, envelopes, and shipping. No lining of pockets, but that is to come, right? An award-winning best seller! Huzzah!

A million thanks to all who have helped, encouraged, and loved me along the way.

May you lie in the shade, on your favorite quilt, and enjoy…

This is a limited-edition run, so, if you would like a copy, and I sincerely hope you do, you have until the books are gone to make it so.

My order is in!

It will be shipped to me, and out to you as fast as I can wrap and post them, which could be as long as six weeks from today, unfortunately, so please be patient. Each copy will be hand numbered and signed (with the name(s) you include in the inscription box below), with more love and gratitude than I can properly express.

I’m afraid I can only ship within the United States, as the cost is just too unpredictable internationally. Here’s hoping the forthcoming Kindle Edition (next week, I hope!) will work for those who are farther afield.

Be like the sun for grace and mercy. Be like the night to cover others’ faults. Be like running water for generosity. Be like death for rage and anger. Be like the Earth for modesty. Appear as you are. Be as you appear.

For my final post on Montreal, welcome to our home away from home, Rue Tourville, tiny and easy to miss.

A cool painting hanging on the wall of our rented abode and one of the highlights of the trip: CIDER! This is ice cider, some of which is made from apples allowed to freeze on the tree before fermentation, while others are made from juice that is allowed to freeze. In either case, it is delicious. The hubster and I decided it is the port of apple ciders, sweet and kind of potent, meant for slow sipping (or pouring over ice cream!). In addition to this rather fancy bottle, I also nearly drank my weight in regular hard cider (dry not sweet), though to call it regular is a shame, because damn, Canadians really have a way with it, and as a big fan and consumer (second only to my love for whiskey), I feel I can say this with some authority.

More shots of our abode. Silly and a tad glamorous at the same time.

These are the buildings in the neighborhood.

He played Led Zeppelin in the most unexpectedly beautiful way, and I felt lucky to hear it.

The Marche Atwater, a very cool public market reminiscent of Seattle’s Pike Place, though this seems to be strictly for food, 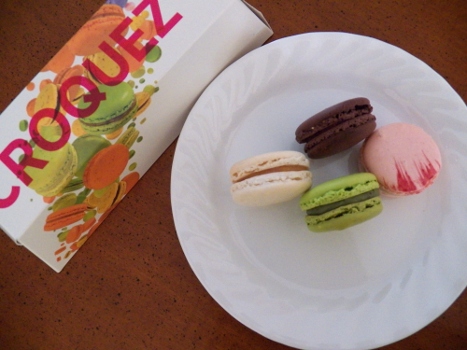 and macaroons. The pink was my favorite. I like it when pretty and yummy collide. 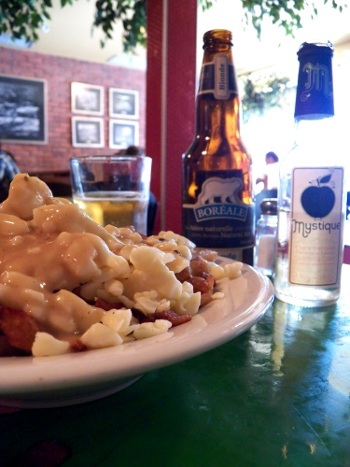 And then poutine (twice: once the traditional way, the other with spicy peppers and sausage, the best), with beer for the hubster and cider for me, but you saw that coming, didn’t you? 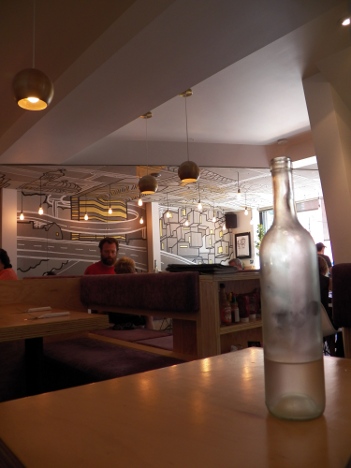 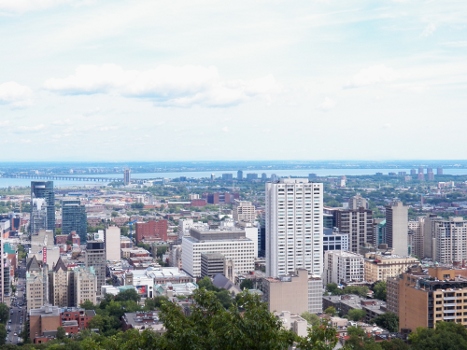 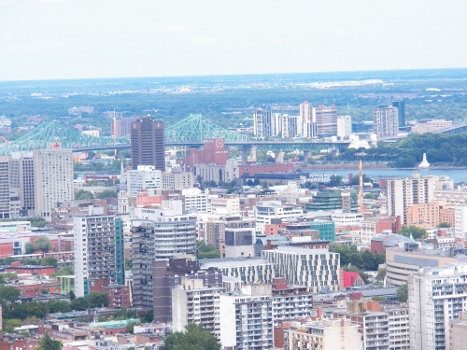 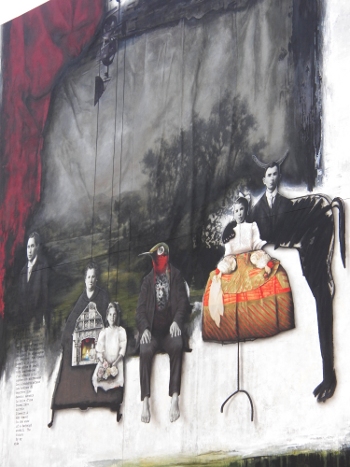 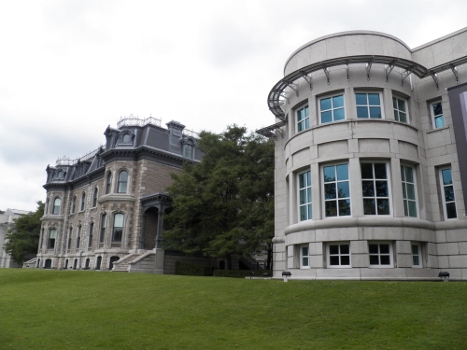 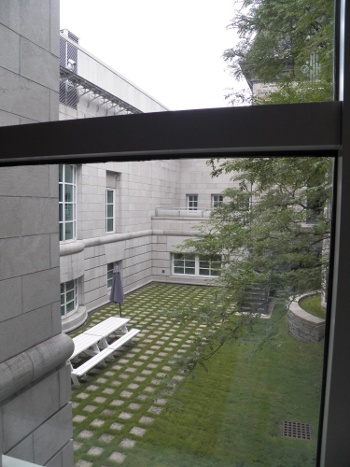 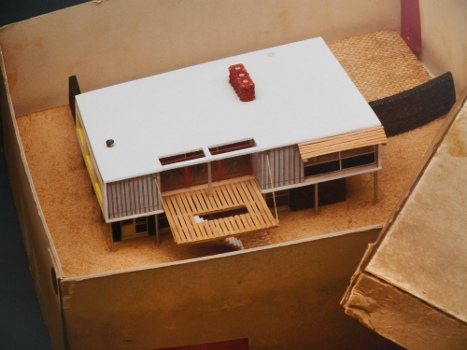 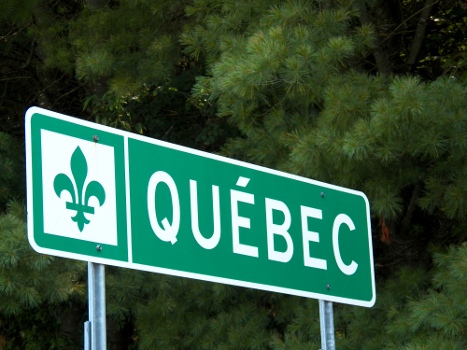 Bienvenue a Quebec! The second leg of our trip east that included The Northeast Kingdom of Vermont, but does not, much to my chagrin, include accent marks. One fine day…

I hoped to share this with you sooner, but that fun visit from my uncle and quite a few projects around the house gobbled up all my time, so here we are, nearly a month later. Quebec, and more specifically, Montreal. Have you ever been? Oh me, oh my, were it not for the fact that we know a thing or two about snow and bitter cold, the hubster and I would pack up our belongings and skedaddle. With friendly people, street after street of fine buildings, delicious food, the best hard cider on the cheap, fine markets, and nearly everything within walking distance, ooh la la! Oh, and there’s that, too, the ability to speak French!

Montreal is gorgeous, and in summer, lovely and warm, a touch on the humid side, wrapped up by the mighty St. Lawrence. It is a dazzling combination of old and new architecture, with fabulous 250 year-old stone buildings within walking distance of brand-new monoliths of steel and glass. I cannot tell you how many times I squealed in glee at some heavenly edifice. Like this one, Marie Reine du Monde, smack-dab in downtown Montreal, and not-at-all out of place.

This newbie makes a nod to the city’s early structures with a glass turret. The hubster is an A-1 turret fan. I suspect that if he had his way, no building would be without one. 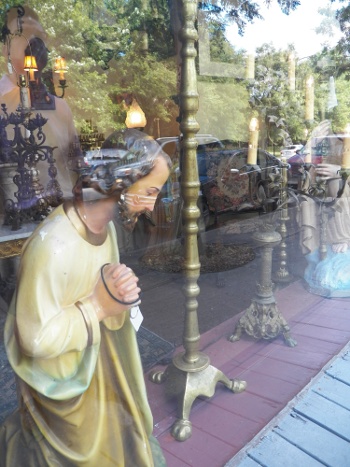 This is on Rue Notre Dame, where antique shops reign.

A fine slice of downtown skyline.

Under the Highway 10. If I had to venture a guess, I’d say that door is a portal to another world. Beh, oui!

I became quite overwhelmed by all of the beautiful buildings.

Basilique Notre-Dame de Montreal: I’m sure you can imagine the rest. It is pretty grand.

The Banque de Montreal in all its splendor. Quiet echoes and Old-Hollywood in its air, I half-expected to see the ghost of Jimmy Stewart here, wearing a perfectly pressed suit. Did I ever tell you that I skipped a day of college to meet him? He was on a book tour for his poems. I was something like 753 in line for his autograph, but I got it! And, even better, as he was leaving, he walked by me, mere inches away, and I grabbed his hand. He looked down and smiled before his impossibly long legs carried him off. 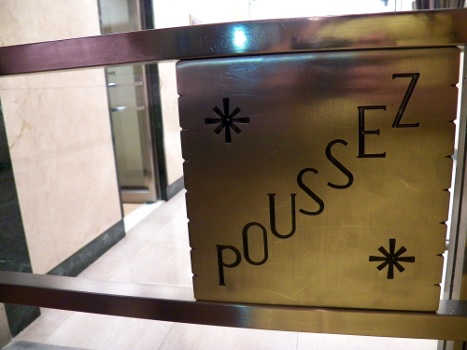 “Poussez” means “push.” It is with these everyday words that I realize how much I enjoy speaking French. C’est vrai… 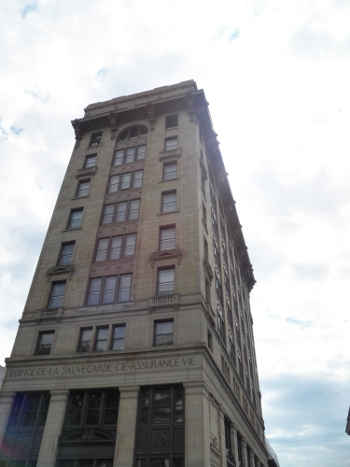 A cute shop in Vieux Montreal

This is the door!

The touristy covered patio out front belies the dazzling garden in back. Take a virtual tour here, for I cannot do it justice.

There is live jazz, delicious crepes, and smiles all around.

A protector, I hope. 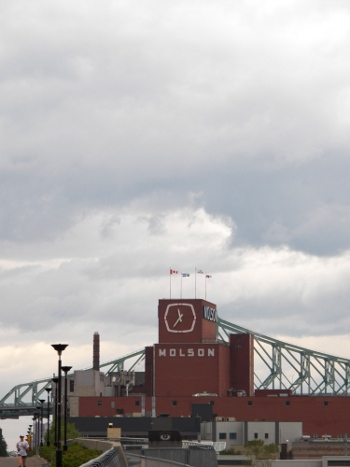 A nod to the McKenzie brothers, because, it’s Canada, eh. And they do say that, surprisingly often.