You are currently browsing the monthly archive for October 2012.

We spent our day on the Fruit Loop and wandering Hood River, torrents of rain and gorgeous blue sky coming in wave after wave. We enjoyed some of my favorite hard cider, made from local apples, and tuna caught off the Oregon coast. We bought a really good rosemary garlic loaf at the Pine Street Bakery. Isn’t the rolling pin accent sweet?

One of the torrents of rain.

There were giant boxes of apples of every variety, and we learned that our backyard tree is an Old Fashioned Stripe Delicious. This is another variety that escapes my memory, but I could not resist a photo of a mama and baby apple. I’d never seen that before.

I sometimes forget that food comes from muddy & wild places.

There were many rainbows to be seen that day, but this one was my favorite.

Just look at that sky! Sun with a sense of impending doom. 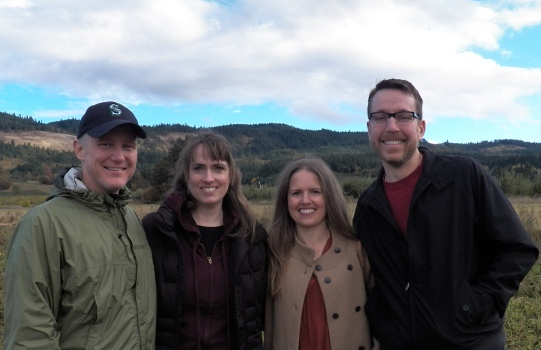 Some of the best friends and companions I could ever ask for.

I shall never cease to be amazed at my own good fortune.

In the right light, at the right time, everything is extraordinary.

And when his sorrow broke

the pictures fell from the wall.

The hair he braided while she slept.

The fingers that skimmed his.

The red lips he kissed

Then he loosened the knot

to let her go.

that keeps him young.

I don’t want to think a place for you.

Speak to me from everywhere.

Your gospel can be comprehended

without looking for its source.

When I go toward you

it is with my whole life.

Why I Love Portland… 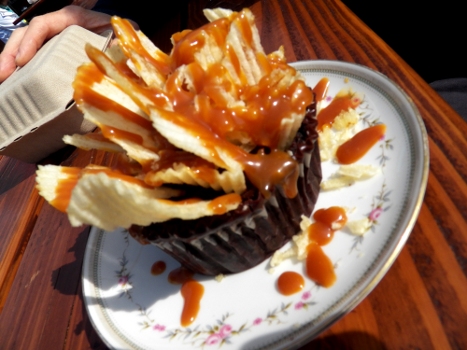 First off, how does anyone not love a place this handsome? I mean, seriously, Portland, you are dapper AND nearly equidistant from mountain and sea!

Second, bridges! I love bridges, and Portland’s got them in spades (with another on the way, I might add), including my all-time favorite, the Saint John’s. Oh my dear, what a beauty you are.

Third, Portlanders are pretty cool. We care. We are creative and have fantastic art and music venues. We read a LOT, with the greatest number of books circulated for a city our size. We are open minded enough to elect an openly-gay mayor and smart enough to take him to task over some less than brilliant behavior, and, in my case, almost wish he was running again.

Fourth, we’re quite green. We have the urban growth boundary to keep sprawl in check. We like alternative energy sources, wind and biomass anyone? We drive (very politely, I might add) hybrid and straight-up electric cars, share cars, and ride bicycles everywhere and have a counter to keep track of the legions crossing the Hawthorne Bridge (the hubster has a knack for being a number ending in 74: 1974, 1774, hmm…). We reduce, reuse, and recycle like the dickens, even things like yard debris, kitchen scraps (however smelly), and motor oil, right at the curb! Because whether or not global warming is real, wasting resources is d-u-m-b.

Fifth, we are crazy about food and beverages! We care about the quality and the people who bring it all to us. We are vegans, omnivores, and uber-carnivores. We love LOCAL! We make cheese, pickles, sausage, whiskey, wine, beer, cider, and so much more. Being good stewards of the land and treating animals kindly, even if their ultimate end is on our dinner plate, is important. We also like food carts and have literally hundreds of them, with fabulous chocolate caramel potato chip cupcakes, Korean tacos (as yummy as they look), and beyond delicious gentle man-made crackers with artisan salami and cheese.

Sixth, we’re a little wacky. You can wait with your lover (hair resembling a My Little Pony doll) in a long line to buy a doughnut where, “The Magic is in the Hole.” It might be in the shape of a penis! Or, as is my favorite, the Grape Ape, be sprinkled with grape dust. We have Zoobombers (probably not what you think) and naked bike rides, the Portland Urban Iditarod, the Adult Soapbox Derby, and many, many tattoos (though the hubster and I remain hold-outs). I once saw a guy riding a unicycle dressed as Uncle Sam. He bowed before opening the door for me at Fred Meyer. So gallant!

On the downside, at least for me, we have miles of unimproved roads, lots of pot holes, and under funded schools, but damn it, don’t you dare think about raising taxes on our beyond amazing local micro-brews. We have strip clubs and creepy massage parlors and prostitutes galore! We still shoot unarmed black folks in distress. We beat gay men for holding hands.

The long and short of it? We are beautiful, brilliant, and flawed. Oh, and wet! Did you know that it rains in Portland? Yup, something like 38 inches a year, though not at the moment. The sun is shining!