You are currently browsing the monthly archive for October 2011. 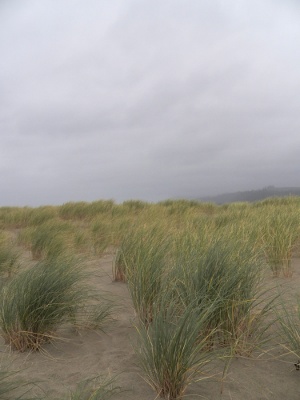 Absence weakens mediocre passions and increases great ones, as the wind blows out candles and kindles fires. 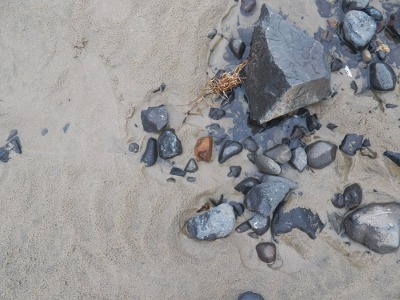 We are separate, distinct.

The space between mountains, ages, grains of sand.

We are friends, collaborators, mentors

We are tethered to this meeting place,

We are drifting, surging

Toward our dreams and the sky beyond.

So Much to Say! 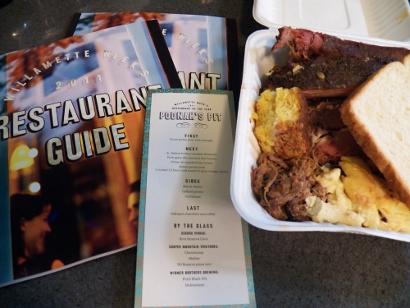 Seriously, if I spoke all of this week’s typed words aloud, my throat would hurt.  Actually, my throat does kind of hurt.  The lovely Maren, my Arts & Letters partner in crime, is in town and we’ve been having fun adventures and yakking it up, though not a single word about A&L.  How funny is that?  Our conversations take place everywhere but there.  Yakkety-yak and a jolly good time.

Speaking of jolly good times, the hubster and I spent Tuesday evening at the Willamette Week’s Secret Supper for Restaurant of the Year, Podnah’s Pit.  It’s a beyond delicious barbecue joint in a beautiful space in Northeast.  I must admit I was a tad disappointed with the choice because it is somewhere I’ve eaten numerous times and kind of wanted a new experience.  However, both of the other restaurants local eaters love and felt more deserving of the honor, St. Jack and Little Bird, are places the hubster and I have enjoyed equally stellar meals. So, no matter what, it would have been a repeat for us.  What are you gonna do?

That being said, it didn’t make it any less fun or crazy delicious.  We were lucky to be sandwiched between some really nice people, software developers and non-profiters on one side and psychiatrist wine makers on the other.  I know – interesting combination! The wine, beer, and conversation flowed, majorly (Not a word?  Really?) so, and we chatted like high schoolers in the cafeteria while digging into a meal that can only be described as epic and bordering on the hedonistic.

There was wedge salad with creamy chunky blue cheese, corn bread, mac and cheese, collards (the only item I didn’t like – I want beans with my BBQ, not limp greens!), brisket, prime rib, pulled pork, and ribs, which maybe doesn’t sound like a lot when in small portions (or if you’re a linebacker), but the plate was absolutely piled with food.  We had to get strategic so as to keep everything on the plate and still eat.  I ate all I could and felt full and belchy (classy!) until the end of Last Call with Carson Daly, which, just in case you aren’t in the know, is over at 2:35 in the AM.  That’s a meal and a half, my friends.

Part of the magic of the evening was that we knew not a soul, yet felt wholly at home with our table mates.  Portland is chockablock with neat-o people.  I love you, Stumptown.  We also had a small world moment when I discovered that one of the psychiatrists at the table (for my family – think half Joe, half Bush 43 wearing Daddy’s cowboy hat!) practices in the same building as a doctor I saw years ago.  What are the chances?

Sadly, however, Dr. Newton died just two weeks ago.  It came as quite a shock, and my heart ached at the news.  Here was this guy who helped me through a very dark period, a psychiatrist without feeling like one.  He talked about the outdoors and visiting Yosemite and getting sun in winter.  We talked about everything, big things, but mostly little things, triggers, and ways to overcome them.  Minor shifts in perspective that created great breakthroughs in my overall wellbeing.  “Instead of thinking that roadkill is dead, think of it as sleeping, forever.  Oh look, that squirrel is sleeping!”  He was the first psychiatrist to make me laugh (squirrel!) and truly help me see that I was okay and needn’t take drugs to feel better or worry so much or bury myself in guilt or doubt.  I was and would be fine.  And I am with much thanks to you, Dr. Newton.  Peace to you in the sweet hereafter.

Let’s just keep the love going a moment – thanks to you ALL for reading and being my friends.  Big hug! 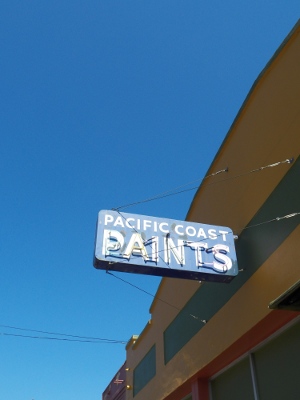 Be neither a conformist or a rebel, for they are really the same thing.  Find your own path, and stay on it. 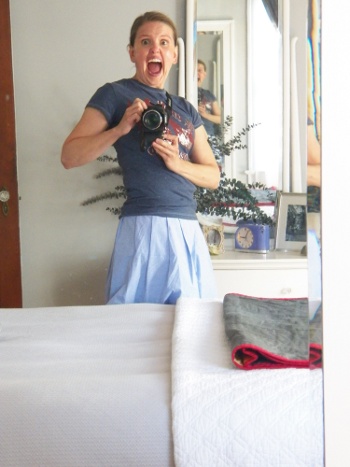 And now, for something completely different.  I don’t normally share my ideas on the state of the world, politics, or the economy.  Partially because I don’t want to stick my foot in my mouth for lack of information, mostly because it’s nobody’s business but my own.  But with all the attention being paid to the film Miss Representation on Facebook and the web, I decided to join the conversation.  This morning, I watched the trailer, eight minutes of ideas, commentary, sound bites, and statistics to get people thinking about the roles of girls and women in American society.  Without having seen the film in its entirety (it airs on the Oprah Network on the 20th), I don’t know how they address the statistics cited, but here are my thoughts on what is presented.

“3% of positions of clout in telecommunications, entertainment, publishing, and advertising are held by women.  16% of writers, directors, producers, and cinematographers are women.”

This is depressing and certainly gives a perspective on why so much of the media we see portrays women in a negative light or as mere sexual objects.  If we aren’t in the room making the decisions, it’s difficult to change the content.

“The 2010 midterm election is the only time since 1979 that women have not made gains.”

I wonder, were there as many women running for office?  If so, were they intelligent and well spoken?  An Olympia Snowe or a Patty Murray (or a Shirley Chisolm ’72: Unbought and Unbossed – to use an old school phrase – she was bitchen!) versus a Michelle Bachmann?  Bless her heart, she flummoxes me, and, as a woman, I’d make no hesitation in choosing a thoughtful, educated man, regardless of party, over a woman who makes so little sense.  None at all.  The same goes for any candidate of color.  I would love to see more representation, but I am not going to vote for someone who doesn’t put a clear message in my voter’s pamphlet.

“At age seven, equal numbers of girls and boys want to be President, but by age fifteen, there is a large gap.”

At age seven, I wanted to be a pilot, and a boy told me I couldn’t because I was a girl.  I cried bullshit but then realized that it wasn’t what I wanted to do anyway.  I’m forty, and, heaven help me, still don’t have a career path nailed down.  However, I can say, rather definitively, that I never, ever wanted to be President.  Maybe the girls who said they did at seven had the same change of heart as I did about being a pilot, not because someone told them it wasn’t possible, but because they wanted something different for themselves.

Again, I wonder how many women are running?  I know I can’t recall many women from Oregon being on the ballot.  Also, that is a difficult job, with work that never ends, the majority of which is away from home.  It’s certainly not something I would choose.  Heck, Mitch Daniels, a man, didn’t run for President for the same reason, “the interests and wishes of my family is the most important consideration of all.”  Here’s hoping this is at least partially responsible for the lack of parity.

Finally, to what started me writing this post in the first place.  Soon after I watched the trailer, I was doing part of my daily workout, a POP Pilates for long and lean legs, and wondered what my motivation for working on my body is.  Do I feel pressured by the media to be something other than what I am?  Am I overwhelmed by images of model thin women and feel I must conform?  In all honesty, no.  First and foremost, I want to be healthy, fit, and strong.  Emphasis on the strong.  I don’t want to take the easy way out by using prescription drugs instead of good self-care.  It’s bad enough that my skin is starting to sag and my hair is turning grey with amazing rapidity.  I don’t want to have to start popping pills, too.  I’ve seen enough prescription drug ads, as many as I have for wrinkle creams and weight loss, to know that they are bad news.  Side effects may include…