You are currently browsing the monthly archive for February 2013.

All the empty plots,

All the ghosts and fears,

All the grudges and sorrows have

I must have inhaled

Enter the chilly no-man’s land of about
Five o’clock in the morning, the no-color void
Where the waking head rubbishes out the draggled lot
Of sulfurous dreamscapes and obscure lunar conundrums
Which seemed, when dreamed, to mean so profoundly much,

Gets ready to face the ready-made creation
Of chairs and bureaus and sleep-twisted sheets.
This is the kingdom of the fading apparition,
The oracular ghost who dwindles on pin-legs
To a knot of laundry, with a classic bunch of sheets

Upraised, as a hand, emblematic of farewell.
At this joint between two worlds and two entirely
Incompatible modes of time, the raw material
Of our meat-and-potato thoughts assumes the nimbus
Of ambrosial revelation. And so departs.

Chair and bureau are the hieroglyphs
Of some godly utterance wakened heads ignore:
So these posed sheets, before they thin to nothing,
Speak in sign language of a lost otherworld,
A world we lose by merely waking up.

Trailing its telltale tatters only at the outermost
Fringe of mundane vision, this ghost goes
Hand aloft, goodbye, goodbye, not down
Into the rocky gizzard of the earth,
But toward a region where our thick atmosphere

Diminishes, and God knows what is there.
A point of exclamation marks that sky
In ringing orange like a stellar carrot.
Its round period, displaced and green,
Suspends beside it the first point, the starting

Point of Eden, next the new moon’s curve.
Go, ghost of our mother and father, ghost of us,
And ghost of our dreams’ children, in those sheets
Which signify our origin and end,
To the cloud-cuckoo land of color wheels

And pristine alphabets and cows that moo
And moo as they jump over moons as new
As that crisp cusp toward which you voyage now.
Hail and farewell. Hello, goodbye. O keeper
Of the profane grail, the dreaming skull.

on your high horse

you grope in the darkness.

braided in my hair.

the sticky sweat of toil

and the gallop of my heart.

and murmurs of pain.

the ache of your saddle

the blisters on your hands

the tempest on your horizon

are all the same.

More photos from in and around our digs. Meet Eduardo y Blanca. They run a terrific restaurant, El Cardon, which was about a two minute walk from our place and where we had dinner nearly every night.

Eduardo makes a mean margarita, and Blanca is a wizard in the postage-stamp kitchen. These are her rellenos. A mi me gusta!

Sunrise on the Sierra La Giganta

We saw so many butterflies. Happiness.

This is a hummingbird nest! Though I question the mama’s placement, exposed over pavement, her construction method was lovely. It was about the size of a hacky-sack, and, in moments of stillness, the sweetest of tiny chirps could be heard from the babies. 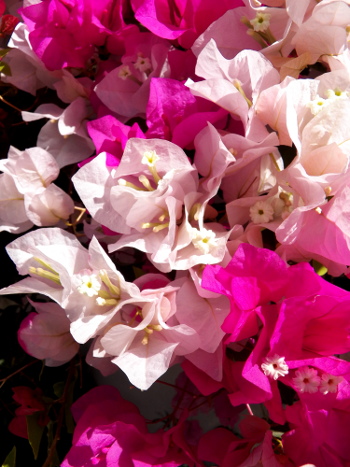 On our way home…

Hola! It’s time for our day trip to Mision San Javier, which lies about 30 km to the west of Loreto. It was actually meant to be a day on the water, with this first photo taken on the malecon waiting for our boat, but the sea was muy bravo, so we had to save our time with dolpins, whales, and sea lions for our next trip.

These are paintings made by the indigenous people of Baja before the missionaries arrived and their lives were forever changed. 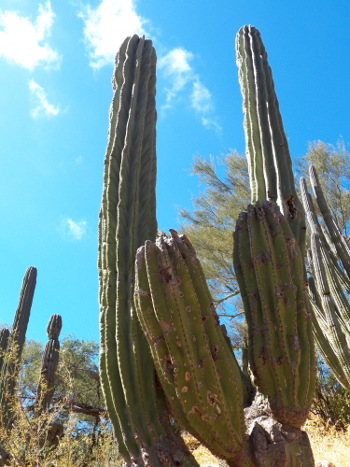 The Calvary Cross that greets visitors to Mision San Javier and the tiny town (150 occupants) that bears its name.

A close cousin of a matilija poppy, I think.

Built with great care by indigenous people whose populations would be decimated by hard labor and European diseases.

Our Lady of Guadalupe

It is a beautiful building, one of the first with pane windows.

Meticulously cared for, it is still used for mass.

This olive tree was planted by the Jesuits over 300 years ago.

The Jesuits taught the locals how to make use of the springs to grow things like olives, oranges, mangoes, and some very famous onions. It was pretty wild to see such a bounty in a desert, truly an oasis.

In a place where it rarely rains and the average low temperature hovers around 50 degrees, it is common to see walls made entirely out of palm. I was awestruck.

Greg makes a friend, of course. He’s cool like that… 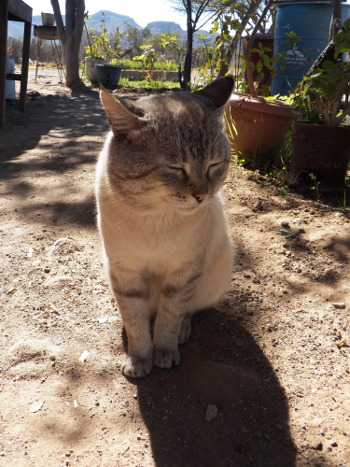