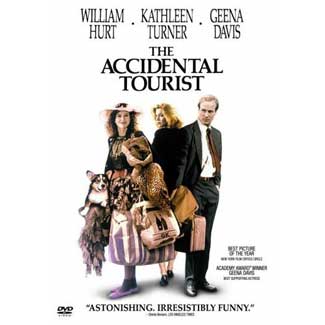 Here’s another quirky film, my friends, The Accidental Tourist.  Boy, oh, boy do I love this one.

The story centers on Macon Leary, an often mystified and somewhat cold man who lost his son to murder and his wife to the ensuing, yet quiet, upheaval.  It seems he will never exit the rather stodgy Leary groove of safety, sameness and unsociability, until…of course until.  There’s always that.  Otherwise, there would be no story.  Until Macon’s dog, Edward (an adorable Corgi), still grieving the loss of his son, starts biting people.

Enter Muriel Pritchett, dog trainer extraordinaire and, quite possibly, his polar opposite.  Her life is anything but “Leary Safe.”  She lives in a rough neighborhood, has a son allergic to practically everything under the sun, wears quirky clothing combinations (like my sweet friend Bridget), and sports the longest fake nails known to man.  Not to mention the fact she is utterly and completely forthright, giving him her telephone number to, “Call.  Just talk.  Don’t you get the urge to do that?” Rather bewildered, he tells her, “Not really.”

As Muriel enters his life, Macon slowly transforms, going from a physically and emotionally rigid man, speaking in staccato tones, to someone who smiles, laughs, and even dances.  But will it last?  For the Leary groove is a rather potent one.

Watch it and see, and when you do, you’ll also witness the the Learys and their awful sense of direction, alphabetizing the pantry, expressing concern for properly sized envelopes, the consumption of GORP (or glop, depending), and discussing their work: “I make bottlecaps.  It isn’t half as exciting as it sounds.”  The movie, however, is – full of laughs, crazy moments, and, of course, a few tears.