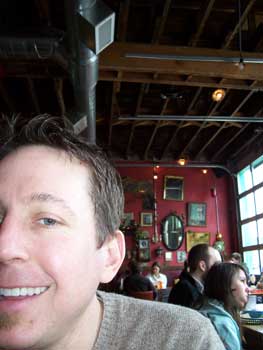 My mind is mushy, and I have been glued to my seat for nearly two hours trying to write a post.  I’ve deleted a lot of sentences and looked at a lot of pictures.  I kept coming back to this one.  I love that smile.  It is so alive and full of content, a pleasure every time I see it.  It reminded me of the times I was happiest to see it, like our wedding day, and when I woke up from my surgery last year.  I was groggy, and a doctor was asking me my name and if I was okay, and then Greg’s face appeared and I felt such a rush of love.  He was there and smiling at me, too!

I then remembered another occasion, long ago.  We were midway through our honeymoon, a two month backpacking adventure across Europe.  We decided to take a vacation within our vacation in Nice, as spending a couple of nights in a city before moving on was wearing on us, so we found a neat hotel that had a full kitchen where we could make our own food, enjoy cold beverages from an actual refrigerator, eat bowls of cereal, and loll about on the beach.  It was grand.

Unfortunately, that wasn’t quite enough.  We found that we not only needed a vacation from our vacation but one from each other as well.  So we made plans to spend the next day apart.  Gregory wanted to find a book to read, and I was keen on doing a little shopping and wandering the streets on my own.  It started out marvelously, for it was June, and the weather lovely, and Nice is a very walkable city.  I was strolling and enjoying the sights when, rather unfortunately, I encountered a man who perhaps took my street walking a bit too literally?  He decided he would walk with me, despite my sincere protests to the contrary.  I was not at all happy with this arrangement, but this guy would not leave me alone.  Thankfully, his shoe came untied, and as he stopped to fix it, I made a break for it.  I don’t think I’ve ever moved as swiftly as I did then.  When I looked back and realized I was free of his company, I was so elated!  But the exhilaration of losing him didn’t last long, as I fretted that I would see him again, and I returned to the hotel, slightly defeated.

Upon entering the room, I saw the hubster lying on the bed, his magical smile looking back at me, and all was right with the world!  As it turns out, his day was less than ideal, as well.  He tried to buy a book, but it wouldn’t ring up correctly, and the women at the store asked him questions, to which he could give no reply, for his interpreter (moi) was not with him, and the only sentence he knew was of ill use.  “I don’t speak French, but my wife does.”

It was a great reminder of how wonderful it is to be together, and so we have stayed.