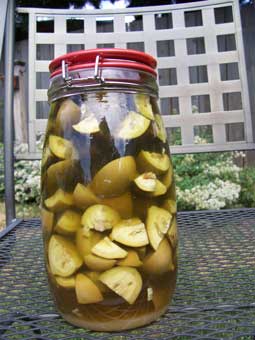 A few weeks ago, while noshing on a salad at the New Season’s deli, I read an article in MIX magazine about a couple who throw a Nocino making party every summer.  I felt a pang of envy as they described it – bringing friends together to have a barbecue and shake the backyard walnut tree to gather the green pods before mixing it all together to make the beginnings of a delicious liqueur.

Frankly, it made me wish we had kept looking for a country home, one where we would have enough room for a walnut, hazelnut, another apple, another cherry, as well as more blueberries, raspberries, and whatever else my heart wants to grow.  I know I like city life too much for that, but if I could find a way to squeeze in a couple of nut trees, I’d be one happy camper, and not just so I could make booze.  As much as I’ve written about it lately, I’m no lush.  Maybe there are dwarf varieties?  I need to do some research.

Anyhoo, to the nocino.   It sounds like it is right up my alley – highly flavorful, a little sweet, always good, like the  tawny port, sherry, Galliano, and Absinthe I adore.  I enjoy having a very small glass (the hubster teases me about this), sipping it over the course of an hour.  I let the liquid sit on my tongue, imbuing my mouth with goodness before it warms by throat and belly.  I am also big on making Kir, a white wine (or the Royale with champagne) and liqueur mixture very popular in France.  Practically every restaurant and bar serves it, and we’ve had many varieties – the typical black currant, as well as raspberry, peach, and chestnut.  Oh so delicious and summery.

So when we had the rather good fortune of coming upon a walnut tree at a park on our adventure this weekend, I was tickled pink.  I wouldn’t be able to have a party on such short notice, but at least I could give the liqueur a try.  We picked what we needed and bought the necessary supplies on the way home.

40 green walnuts, picked early enough so they are easily cut with a knife

zest of one and a half lemons

Rinse and pat dry the walnuts.  Apparently the juice of the walnut makes a permanent dark stain, even though the juice is clear initially.  I wore gloves and grubby clothes and used the underside of my cutting board, just in case.  Cut the walnuts into quarters with a sharp knife or cleaver.  Be careful, especially if you picked them a tad late, like me, as some of them will be a little hard and shoot across the cutting board.  The Italians recommend picking the nuts on June 24th – a magic night before San Giovanni when medicinals are at their peak.

Put walnuts, spices, zest, sugar, and vodka into a large glass container, covering the walnuts.  Cover and shake well.  Store for six to eight weeks, shaking every few days.  It will get darker as the days go by.  Mine is already much darker than when I started on Saturday (it was almost clear).

When you are ready to bottle, remove the walnuts and solids with a slotted spoon, remembering that the liquid will stain.  Strain through cheese cloth or coffee filters into glass bottles.  Cap or cork tightly, and allow to sit for another month or two.  Apparently, if you’ve got the patience to let it sit another year, or two, or even three, it is something quite special.  I think I’ll make my batch to have now and later.

Variations – some call for the combination of orange and lemon zest, orange on its own, the addition of star anise, and vanilla.  The amount of sugar also varies.  I didn’t want mine too syrupy, so I used half a cup less than the average recipe and a little more vodka.  Finally, some recipes say the mixture should be left in a sunny spot, others a cool, dark one.  I opted for cool and dark, so the cats can’t knock it over.  I think it is as diverse and special as the people who make it.  I sure hope so…