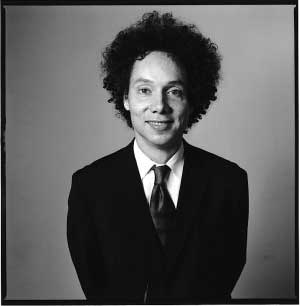 Did you know that if you want your kid to be some sort of sports superstar that you should make sure his or her birthday is on the day or just after the deadline for youth sports groups?  Well, and that the kid is talented and dedicated and all that, too.  But the birthday really helps and in a big way.

I learned this and many other gems from Malcolm Gladwell, one of my favorite writers.  This in itself is a bit of a revelation for me, as I didn’t really think that I had any favorites.  I don’t tend to read more than one or two works from a single writer before moving on to different, sometimes more verdant, sometimes just vacant, pastures.  Him, I like.  I’ve got all three of his books: The Tipping Point, blink, and Outliers.

Each explores small details of life in a somewhat loose but rather engaging fashion.  I like that the books aren’t terribly academic, either.  Don’t get me wrong, I think he is very intelligent, but he isn’t out to prove it in his books.  He’s exploring what makes people successful, what makes a certain type of shoe sell, and why our first instincts really do matter, among other topics.   The fact that he does it in a way that is often humorous and always interesting is what makes me like him so much.

I won’t give any more away because that would spoil the fun of the books, but I will say, if you are curious about patterns and some of the reasons why things happen to be the way they are, I highly recommend his work.  They come from a charming man who is really interested in life, people, and asking questions that get answers.