Hello Everyone! Are you ready for a looong one? Portland’s had truly Spring-like weather, the absolute best I can recall in my fifteen years as a citizen, excellent for gardening, with more digging, planting, and walking. This time we actually went beyond the city limits to where John McLoughlin, also known as the “Father of Oregon,” first laid claim to the territory in the name of the British.

In the back yard at the McLoughlin House, which was moved from its original location near the river. The cannon dates from 1789!

The tunnel under Singer Hill Road,

named for Singer Creek, which exits on the other side.

I love Art Deco, and the Clackamas County Courthouse is a dandy example.

Apparently it was a great day for fishing, too. Dontigny, were you out there?

Climbing the steps to Mt. Seleya.

Stopping for a lunch break at Mi Famiglia. We had a delicious spinach salad and mighty fine wood fired pizza, cremini and peperoncini, to be exact.

The poor hubster, the one time he really wants to shop, the place is closed. He missed out on a slice of our childhood, with metal lunch boxes, Matchbox cars, Tonka trucks, action figures, McDonald’s glasses, and much, much more…

The tunnel to the Oregon City Municipal Elevator, the only one of its kind in the United States, and pretty darn cool, if you ask me.

It looks a bit like a space ship from the exterior.

The new Oregon City Bridge, boy is it a looker.

Oregon City is filled with charming houses. This one dates to 1877.

West Linn paper and vestiges of businesses past.

My second favorite mural ever! The first is in this post.

The gorgeous Atkinson Memorial Church, circa 1924.

Waterboard Park bridges the second and third tiers of Oregon City. Hushed, save for the songs of robins, towhees, and one giggling human.

This is asphalt, slowly being consumed by earth and landslides. We felt as though we’d entered a portal into Logan’s Run, wondering if around the next bend we’d hear the howl and screech of cats and the moaning of “Sanctuary!”

Downtown Portland from the bluff. The hubster’s building is the tall one on the right. Hi Buddy!

This is considered to be the oldest working fire station west of the Rockies. But who cares about that; the sign is neon!

Inside the 100 year-old Carnegie Library.

Treats at Mike’s Drive-In, a banana and a Mayan shake.

Thanks for another great walk, Laura O. Foster!

For a while now, I’ve been getting up early, without an alarm, between 5:30 and 6:00.  If it’s a weekday, sometimes it’s with the hubster.  On weekends, I smell his cheek (mmm…), give him a kiss, and rise on my own.  I get dressed, feed the cats and the birds, grab a bottle of kombucha (eight ounces a day, my elixir of life?), and a thoughtful book.  Lately it’s been the Pema Chodron, Start Where You Are, I found at the library (I bought my own copy).  I sit on the bench on the back porch, wrapped up in a scarf and blanket and one cat or another on my lap.

First, I sip my kombucha slowly, listening and watching all that is happening.  At this hour, it is pretty quiet.  The birds chirp and eat (see the crow?), a few cars pass, but not too many.  Though I like being out when it is sunny, so I don’t feel so cold, the rain is nice, too.  It falls so sweetly onto the metal roof over my head.

Once I’ve finished the kombucha, I read, but just a little bit.  I don’t want to crowd my mind with too many ideas.  It’s a busy place already.  Then I sit and think about what I’ve read.  Today, it was, “Rest in the nature of alaya, the essence.”  Watch whatever comes up in the mind, the rising and falling of thoughts.  There’s no need to despair about the quality or content.  They’re just thoughts. “No big deal,” Pema says.

I like the freedom this gives me.  Permission.  I have very dark thoughts sometimes.  Heavy.  Unkind.  Cruel.  They’re no big deal when I give them the space to be thoughts.  They lose their potency and dissipate, though not always.  Some are more stubborn and sticky, preferring to linger longer, but I’m finding more lightness around them, too.  Maybe it’s just being outside in a place that I love, that I’ve worked hard to create.  I’ve chosen every piece of furniture, every ornament, every plant with care.  I’ve cleaned, weeded, cut, and fed everything here.  I feel safe, safe to let my thoughts rise and fall like the plants themselves: sprouts, leaves, flowers, and seed, before starting over again.

I stayed up well past bed time finishing this book, it so engrossed me.  It’s the kind of story that takes the reader to the precipice and holds them in trepidation, page after page, at what ghastly occurrence is surely just beyond.

The story is set in the Ozarks, a hardscrabble land of immense beauty and sheer violence, the people living very near the precipice themselves, getting by in ways lawful and otherwise, mostly the latter.  It’s a place where blood and names matter, determining histories and futures, yet aren’t nearly enough when times get desperate.  The main character is Ree, a tough as nails seventeen year old who wears thin cotton skirts with combat boots in the dead of winter.  She’s a high school dropout, but not for wanting more for herself.  She aspires to a military life far, far from this existence, but, for now, this is where she finds herself, caring for her younger brothers and a mother lost to mental illness.  Her father, Jessup Dolly, possibly the best crank cooker in the vicinity has disappeared, left the family without anything, and worse.

Ree gets a visit from the local sheriff warning her that Jessup’s court date is one week hence, and if he doesn’t show, they will lose the house and land that have been in the family for generations.  Even more, she will lose any opportunity to flee this life, to make something for herself,  for how can her brothers and mother get on without her and a place to stay.  Despondent, she sets out to find him, walking through hill and dale to pay visits to some pretty scary characters, anyone who might lead her to him.  No one will talk, save to deliver dire warnings of impending doom if she doesn’t quit, though she never does, even when she reaches the end of her rope.

It’s a thrilling, page turning story that took me to the back of beyond and home again, though travel weary.  I highly recommend it.  It’s also, as they say, a “major motion picture.” Put it in the queue.

Under the Same Moon 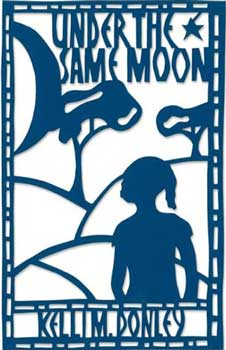 My friend Kelli, of African Kelli, has just had her first book published, and last night, her very first reading.  I can only imagine the butterflies, joy, and magic in Phoenix!  A dream come true.

This moment is even more special for me because it gives me hope that my book will one day be out there, too.  As well, my good friend Colleen designed the cover, and rather beautifully, don’t you think?

I am hoping we can all make it a bit sweeter by buying our own copies (mine is on the way).  Let’s get her to the top of the Amazon list!

Under the Same Moon, by Kelli Donley

Abena Udate was selling mangoes on a humid market day in her Mozambican village when she caught the eye of a wandering foreigner. Kidnapped and brought to live in suburban America, the African teenager struggles with the glaring cultural and social differences of her new life. Abena is expected to play along with her kidnapper’s story — she’s just another hungry child plucked from a desolate country and saved by foreign adoption — or else. As her younger brother Kupela searches for clues to explain her disappearance, Abena must decide whether to remain with a family she doesn’t love for a life of luxury, or find a way home to those she loves in a world of despair. 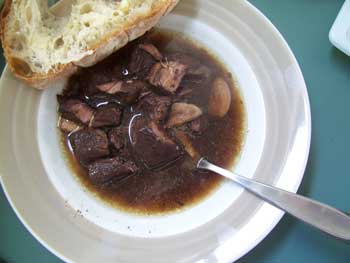 I just finished reading the book Heat by Bill Buford.  It chronicles the time he spent learning everything about cooking from Mario Batali’s kitchen at Babbo to learning the art of pasta making and butchering (more than that – an appreciation for quality meat) in Italy.  It is a pretty good, and not surprisingly, rather hedonistic read.  These people don’t just make food, they eat it in mass quantities and wash it down with plenty of wine!  Though there aren’t any actual recipes included, there are descriptions of them.  The following is my best approximation of one.  Five ingredients, phenomenal flavor.

You may also be pausing a moment, thinking stew?  Really?  In June?  Well, non-Portlanders, the weather has been wet, very wet, even for us, and something that simmers in the oven all day is really not out of line but quite appropriate.

1 1/2 pounds stew meat – mine was diced, but you could easily buy one shank and shred it at the end.

1 tablespoon freshly ground black pepper – or more, if you like

Combine ingredients in a covered oven proof pot.  Place in 400 degree oven for 15 minutes.  Reduce the temperature to 200 and continue cooking for another 10-12 hours.  The final product will be melt in your mouth tender and ever so yummy.

Serve with crusty white bread, generously spread with butter, a glass of  the remaining bit of wine, and the company of a good friend.