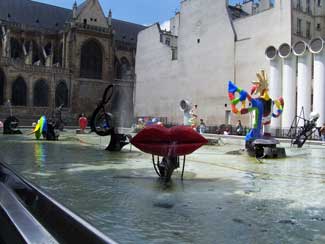 When I was in college, and had been studying French for about ten years, I needed a break.  I was bored and tired and getting kind of cranky with it, so I took German for a year.  Boy was that interesting!  I learned a lot – like German is hard and well, uber-foreign after so many years of French.  My mouth struggled to make umlauts and not caress words.   I also learned that my brain, like a library, has a distinct foreign language section.  When I couldn’t remember a vocabulary word or phrase in German, my electrical impulses went zooming to French, found what it was looking for and out it came from my mouth.  It was both funny and strange.  “Guten tag Herr Zimmer, je m’appelle Colleen.”

The greatest bit that I learned, however, is that a pause (German word for break) is a marvelous thing, for when I returned to French after my year of German, it was with renewed interest and vigor.  I even decided to become a French teacher!  Though I never found a job, but that is another story, isn’t it?

Like German, I started this blog as a pause from Polite Society.  I had finished my rough draft and felt like I needed to keep up the momentum while I let it rest.  Well, now that I have started my second novel, I feel like an old pick-up on a cold morning.  I turn over, then wheeze and sputter before pumping that gas pedal to keep me from dying.  I know that if I just let the engine warm up a little, I’ll be good as gold.  But, in order to do so, I need to focus on this one task, rather than divide my time, which I must admit, I’ve been doing rather poorly.  Neither the blog nor the book is up to snuff at the moment.

So, in this somewhat cryptic fashion, I am letting you know that I am taking a much needed pause from the blog.  I need to focus on my novel, get her humming to life.  Thanks so much for reading and commenting these past months, and check back from time to time.  This won’t be the last you hear from me!