You are currently browsing the daily archive for January 9, 2009. 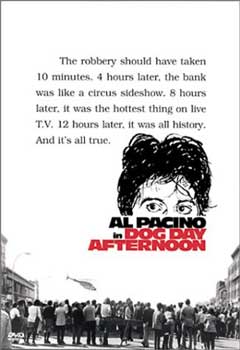 Do you ever have those moments when you believe you are far greater than you really are?  Well, imagine that on one of those days you actually decide to take action, and say, rob a bank.  The 1975 film, Dog Day Afternoon, starring Al Pacino is the nerve wracking, hilarious, and sad version of actual events that occurred in 1972.

I had heard great things about the film, but once we started watching it, I got a little worried.  The bank robbery is going awry about five minutes in, and the film’s got another two hours to go.  Thankfully, I was quickly put at ease, for there were so many twists and surprises that kept me on the edge of my seat.

I’ll reveal a couple and then leave it there.  First, and in my opinion, most odd.  Sonny, the main character, is married and has two kids, but the whole purpose of the hold-up is to pay for a sex change operation for the man he has most recently married.  A man who just attempted suicide to get away from Sonny.  The reason I found this odd is the love that he shows for each of his “wives.”  He doesn’t seem the least bit conflicted about it – he’s just going through life.

Second – the robbers, Sonny and Sal (John Cazale from the Godfather), are pretty nice guys.  So nice, that the hostages they take end up having a great time.  It’s like a surreal party with pizza, guns, and ammo!  This is one of my favorite quotations from the film: “I had to tell him Wyoming isn’t a country.  I’m with a guy who don’t know where Wyoming is, and you think you’ve got problems!”

So, if you’ve got a hankering for something vintage, and of course, a little off beat, give it a try.  You’ll be chanting “Attica!” for the rest of the week.