You are currently browsing the daily archive for October 23, 2009.

The Newshour with Jim Lehrer 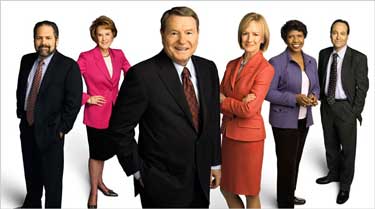 I am a woman with very few regrets.  Frankly, I don’t see the point.  I am glad about everything that has happened to me.  Every event shapes me and my world view and presents me with opportunities to learn and grow.  Take, for instance, a certain boy who was in my seventh grade P.E. class.  I thought he was funny and had great hair.  It was something I wanted to tell him, but I thought it too trivial, and furthermore, was a bit shy.  He committed suicide shorty after this.  Now, I don’t know that it would have made much of a difference to him and his reasons for taking such a drastic measure, but I certainly always appreciate a kind word, especially an unexpected one.  As you might imagine, with that bit of knowledge, that I really never do know when I will see someone again, I hedge my bets and speak the truth.

It is with this same mind set that I write this post.  I love The Newshour with Jim Lehrer, especially now that it comes on at 4:00, and I can have an intellectual afternoon break in front of the television.  That being said, I do sometimes switch to Oprah if I’ve had enough of a topic.  Don’t forget – I am a Gemini, we’re a tricky lot.

So, to The Newshour. Gosh, do I love this program.  To my mind, it is serious news without taking itself too seriously (watch on Friday for Shields and Brooks, there’s almost always a laugh there).  It is such a fine production, covering diverse topics, and with a depth that other news outlets lack.  Since it is an hour broadcast, there is ample time to really delve into the news of the day, as well as the opportunity to present opposing view points about a topic, allowing me to make up my own mind.  This was especially so during the presidential primaries last year.  Every Republican and Democratic contender was invited to speak and given ample opportunity to do so.  Unlike the mainstream news who only showcased who they believed to be the front runners.  I don’t like being told what I should think; I can do it on my own thankyouverymuch.

My favorite aspect, however, are the correspondents.  They really shine here.  Each is a consummate professional: poised, highly knowledgeable, polite (some say too much so, but I disagree), and quick on their feet.  They are asking the great questions before I can even think of them.  I so appreciate this.  As well, given the pacing of the show, I really understand a topic by the time the segment is over, rather than feeling like I’ve gotten a snippet of information that only leaves me with more questions than answers.

Another highlight is the Honor Roll, displaying, in silence, a photograph, name, rank, and hometown of deceased U.S. service personnel in the conflicts in Iraq and Afghanistan.  Though it always breaks my heart to see,  I wouldn’t have it any other way.  My discomfort is a small price to pay for their sacrifice in my country’s name.

As well, as someone who appreciates art, there are many interesting interviews with writers, actors, filmmakers, and artists of every stripe.  I hope to one day be showcased among them.

There’s just so much goodness in one hour!  Thanks Ray, Margaret, Jim, Judy, Gwen, Jeffrey, Paul, Kwame, Betty Ann, and all the others I can’t recall at the moment.  Your program is very fine, and I would certainly be at a loss without it.