You are currently browsing the archive for the Loving category.

A new coat for Juniper, in one of my favorite colors (teal!) and with a useless and utterly adorable faux fur hood. I feel sort of lame buying her such things, but our girl’s genetics did not prepare her for our weather, and so I must or watch her shiver.

A couple of Greg’s favorite eats: red chile and chocolate cake! I also tried my hand at pupusas because 1. I never had, and 2. They are filled with cheese. A duh if ever there was. I also like them because they are far easier than homemade corn tortillas. I know my way around the kitchen, but dang, do I have a difficult time keeping them from sticking.

I made his favorites, not just because I love him, which would be enough, but also because my best love had hernia surgery last week. He deserved extra special treatment!

It was a nice role reversal, with me the one waiting and hoping and uttering every little prayer the surgery would be as uncomplicated as the doctor had foreseen. Thankfully, it was.

He was and remains a good patient, utterly silly while the drugs wore off, rejoicing in the complex flavors of ginger ale and saltines (the best ever), wielding them like precious metals, giggling (and grimacing – ouch my tummy hurts!) and making me do the same. It only took a few days before he could walk at his normal pace on our Juniper jaunts, but he’s still got a way to go in terms of pain. Please think good thoughts for him.

Makings for a rhubarb apple crisp on our regularly scheduled dessert day (Sunday). As I peeled the apple in one long go, I thought of how I marveled at adults who could do the same when I was a child, how it seemed so impossible to keep the peeler going, going, going. How lovely it is to learn and grow and mature, the impossible made simple and everyday. Life is a wonder…

As my 49th year saunters ever closer, and mere days after Greg and I celebrated a wild and wonderful 29th (!) year since our first date, much thought has been bubbling. On who I am, this western place that is home, and our couplehood.

I feel more and more centered, in body and spirit, than ever. More honest, stringent, and strident. My intolerance weeding more and more people from my life. I am shucking those who are irresponsible and unkind, who place demands of adults on children too young for the burden, those blinded by an embittered victimhood and confusing love with control (If you loved me you would…). My desire for balanced relationships nudged ever more to the fore.

I have no social media link: no Facebook, no Instagram, no Twitter. I am here on this old fashioned blog form, and likely mostly alone. I honestly have no idea. It brings the hubster and I great joy to read and reminisce, and that is the best I could ask for, really and truly.

Before quitting Facebook last summer, I experienced a general sense of unease. Some of it was my use as a pawn in the Zuckerberg machine, and some political, too, but I also had this impression of being among people speaking a language I did not know. Groundless. It’s strange, too, because, I’d been in that space for nearly a decade and had enjoyed it enormously at times.

Then the shift came, when I realized that relationships have a season in life. Change and death are as natural as growth, without an ounce of malice or regret. Time and distance separated me from individuals I’d known or never truly connected with in the first place. Yet this world opened up to me, and I sent and accepted requests for friendships that were out of season. There were exceptions, of course, but relatively few, and I have kept in contact with the majority of those people. It feels right.

And to this place – Southern Colorado and New Mexico, where my heart shall be forever rooted. My eyes gaze upon it, joy-filled and centered. The land of ancestors and new dreams. The scent of sage and pine. And that big, blue sky.

I suppose it is no surprise that we celebrated our 29th year in this very space, first to Las Vegas, of course. But then, forging a new path, on our way to Santa Fe, between Mora and Espanola, part of which is the famous High Road to Taos.

The above constitutes the highlights from Las Vegas to Mora. The St. Vrain Mill, which would be lovely restored, and our hike above the Fish Hatchery, with glorious views of the entire Mora Valley. Though the photo of Juniper and I doesn’t show it, the wind was a wild whipping force, and frigid, too.

Mora, and the majority of the High Road, for that matter, is known for wool and world famous weaving, with some families the seventh or eighth generation practicing the craft. We did not miss out, stopping at the Mora Valley Spinning Mill. They have locally processed yarn and weavings and every manner of art and craft, staffed by kind and efficient staff. It’s worth the trip!

The Cleveland Roller Mill – closed for the season, but looking good.

As is the beauty of grace, at the moment our hunger verged on unbearable, we rounded the bend in Penasco, the sweet murals and Sugar Nymphs Bistro awaiting. The wood stove was roaring, the coffee was hot, and the food as delicious and enchanting as New Mexico itself.

My cousin Alli holding her dad’s hand. After he lost consciousness, three days before he died. Their last photo together, of a sort.

I stayed with my aunt last week, joyfully helping, with medicine and cooking and comfort and company. I spoon fed and soothed the night terrors of a man who once terrified child me with his mad driving of an impossibly cool Fastback Mustang. How strange the tides of time.

I brought enough books and magazines and craft supplies for ages of reading and fiddling and doing. We made cute felted wool pixie dolls (no photo, drat). We watched hour after hour of Brad’s cool car shows and my aunt’s favorite dramas. We talked.

Of the past – the sweetest memories of me watching my aunt carefully applying makeup while listening to Bread on the hi-fi. How she still has the album in her collection. Of the first time she made Ro-Tel dip and I, as a cheese loving maniac, devoured it and have since eaten just about every spicy melted cheese I can get my hands on. Her, too. We enjoyed this while I was there. It was gone lickety-split quick.

Of the future and letting go. The first time she’d be on her own, after forty-six (!) years of marriage. The hush of a home occupied by one. A life entirely of her choosing, what to do, how to be. The fearful thrill of the unknown. My love for her, then and now.

In conversation with her daughters, my cousins, I was confronted with my own letting go. It was assumed that there was bitterness on my part, my lack of relationship with certain relatives was somehow eating at me. Quite the contrary, being in a relationship with my abusers was a great source of anxiety and pain.

I once read about a psychological study that involved a subject sometimes receiving food after pressing a button and other times receiving a shock. The subject basically went crazy because they never knew what they would get. That was me. When I interacted with my tormentors, sometimes they’d be friendly, shower me with kindness, gifts even. The next time, they’d be cruel, insult me, or blame me for something entirely out of my control. Oh, the wild anxiety, fretfully anticipating what each interaction would bring. Nausea. Headaches. Physical pain.

When I finally ceased all contact, it melted away. I found myself happier and peaceful, able to sleep through the night, at ease in my own skin. The only source of anxiety or bitterness I have felt since is at the hands of the so-called “helpful” who think my lack of interaction is somehow sad or harmful or foolish or whatever. That my life is their business and I ought to behave differently.

Sad is when I disregard my own sanity and safety to forge a relationship for the benefit of others. I’m glad I know better now.

It’s beginning to look a lot like Christmas, as the song goes. I collected fallen limbs out walking, bought a few decorations (the cute trees are from Target!), and pulled out favorite treasures, so the house is nicely decked out and smelling lovely!

This past weekend, we enjoyed a little road trip to Denver to spend time with some of our favorite people. It was quite the whirlwind of tasty food, killer cocktails (Bananas & Bourbon!), games, and lovely company. As is often the norm at this time of year, it was frigid and sunny, with the bustle of humanity as jolly as the skies. We also had an easy drive both ways, which is always nice.

Just because they are so darn cute. Hope you are enjoying the holiday season! 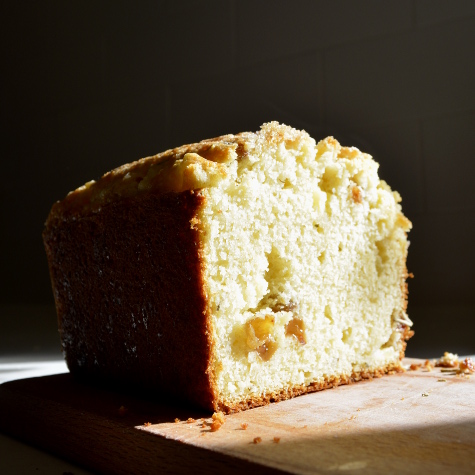 Hello! What a perfect light jacket with full sun kind of day. We sipped our Sunday coffee outside, while Juniper bounded around the yard, chasing balls, eating snow, and generally amusing herself in the warm sunshine.

I had apples that had gone a little wrinkly and decided to make the most of them with Martha Stewart’s apple rosemary tea bread, probably the first and best recipe of hers I ever tried, gotten from a Christmas book ages and ages ago. It is moist and delicious, toasts beautifully, and as the name indicates, is rather nice with tea. We (more accurately Greg) pretty much devoured it. 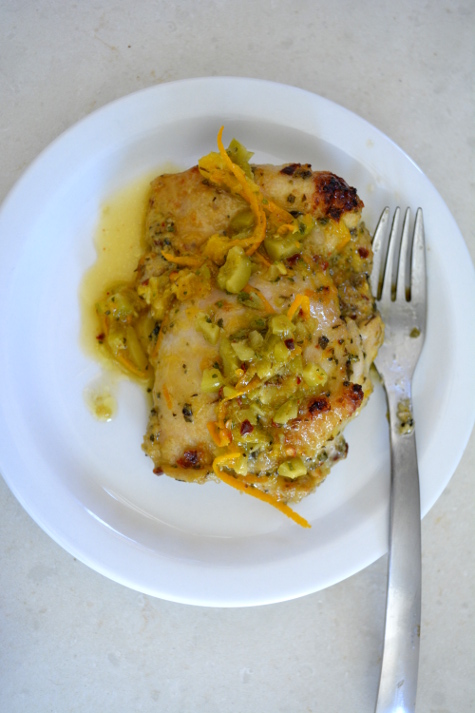 Chicken with orange zest and green olive gremolata – a stellar combination that was quite pretty, too. 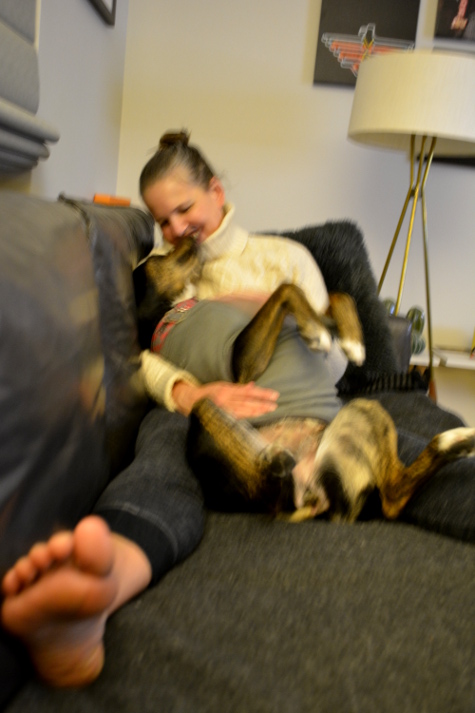 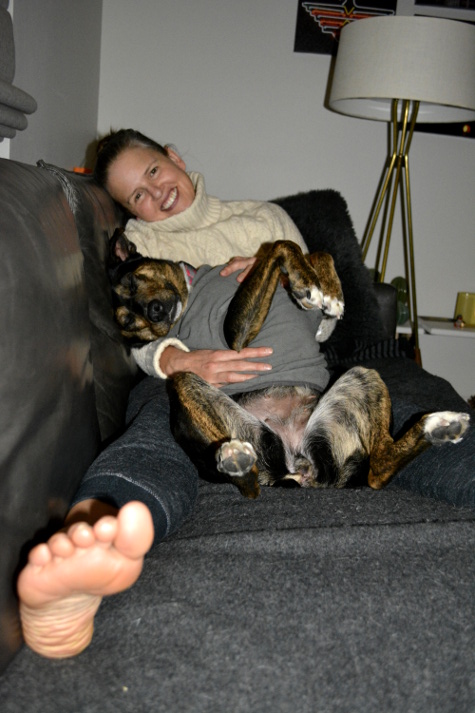 Me and my girl! She is such an adorable love bug. Greg and I were cuddling in bed, talking about life this morning, how you never know what the future holds. We laughed aloud when we imagined our twenty-years-ago selves pondering life with a dog and a brick ranch in Colorado Springs. We have absolutely no complaints about the path that led us here. 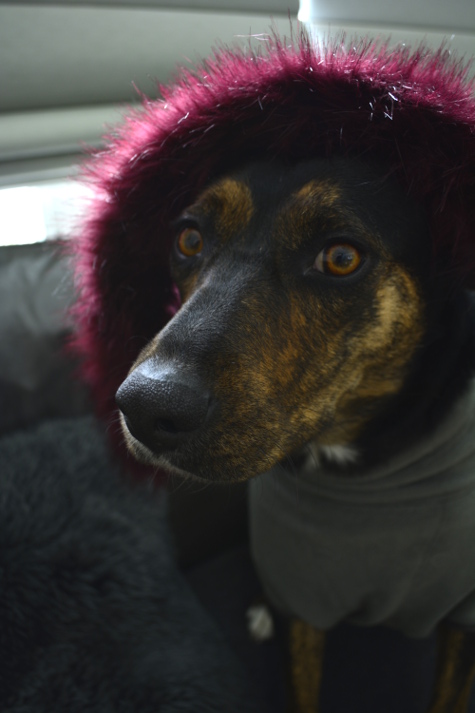 I bought a rather smart coat in two of my favorite colors (army green and rust!). It has a liner that is also a perfect down jacket. The one caveat? It came with this wild maroon faux fur hood attachment. I might have considered it, as it does seem quite warm, but it completely obscured my vision. Juniper didn’t think much of it either, but how cute she is in her wondering, “What have you done to me?!”