You are currently browsing the daily archive for October 20, 2008.

That’s how many pennies I just found dumped in the street in front of my house.  Sixty-seven!  There was tobacco, cigarette butts, and some industrial staples in the mix too, but sixty-seven cents.  Holy smokes, Mr. or Mrs. Hepped-Up-On-Nicotine, you could have bought a candy bar with that money, savoring every sweet bite, or given it to a child and watched her count each coppery one, staring in wonder to see if she put them into neat piles, long rows, or groups of five or ten (like I did below – after washing them off).  Gobs of entertainment potential for that sixty-seven cents and you chose to dump it on the asphalt. 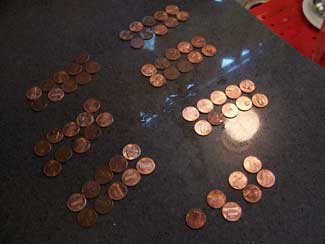 Well, as my dear Byron Katie would say, “There are no mistakes,” and, “This is happening for you,” so rather than remain miffed at this dump, I enjoyed it. I really did, here’s how:

First off, as you may recall, I’ve kind of got a thing for pennies, especially found ones.  So when I gazed out the window and saw them shimmering in the afternoon light, you bet I got excited.  To think that God sent me sixty-seven of them at once is nothing short of fantastic!

Second, as I was crouched in the street, hair wild and my husband’s rather large winter coat about my shoulders, filling my hands with the precious metal, my letter carrier, Karl, happened to come along and said, “Hey, you know, I could pay you for the chutney you gave me, no need to get money off the street!”  We both had a good laugh.

Third, I most certainly had to call my dear hubby to tell him, not only about my find, but about Karl finding me in the midst of my find.  More laughter!

Fourth, I documented the story with this post and a photo to boot.

So, I guess the only thing left to say is, thank you Smoker – you made my day!