You are currently browsing the daily archive for September 4, 2009. 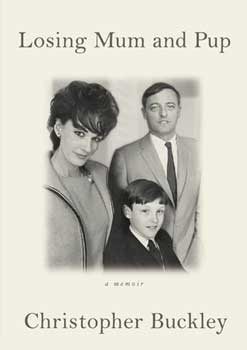 I do not come from a perfect family.  I am not the perfect child.  I don’t call or visit terribly often, rarely send gifts, and can be quite blunt in my assessment of my parents.   In their defense, it has rather little to do with the way I was raised and much, much more with my own wacky Gemini-ness, as my Mom and Daddy did a good job with me and my siblings, all things considered.  We are decent, kind, hard working citizens of the earth.   As well, I love them very much and do not, at all, look forward to their passing.

It is from this same, quite honest, point of view that Christopher Buckley explores the living and dying of his own rather unique parents, the rather famous socialite Pat, and father of the modern Conservative (with a capital C, in his own words) movement, William F., Jr. or Bill, though I can’t really utter the latter from my lips, as it seems too plain for such a dandy of a wordsmith, too vanilla pudding.

As I had hoped, the book is also a rather good time.  In between the sadness and tears, I found myself laughing out loud (no exaggeration – the fellow on the blanket next to us at Vicky Christina Barcelona gave me and my book many a concerned look) at his parents idiosyncrasies.  His mother was an extraordinary dresser and an even wilder liar, sometimes wickedly so.  Yes, liar – and so bold about it too!   As for William F., save for the rules of the Catholic Church (oh how he despaired about not being able to see his Jewish friends in the afterlife), had no qualms about breaking other laws that seem quite logical to me.  Along the same lines, these are people raised in the time of better living through chemicals: popping uppers and downers without a care, smoking cigarettes and cigars, eating whatever they wished, and drinking, oh the drinking!

It is a rather singular approach to grief, love, and letting go of the people who brought him to earth, told with with wit, warmth, humor, and heartache.  I highly recommend it.