You are currently browsing the daily archive for September 16, 2009.

Here are the reasons why our trip to Denver included so much talking and driving, the reasons why it is always so, for that matter.  Whenever we head back to Colorado, we, quite literally, fill our days with special people.  This trip was no exception, driving hither and yon to catch up with friends from the present and past.  Though acquaintances from the past played an even larger role this trip, as Facebook has brought us back in touch with the multitudes from our school days. 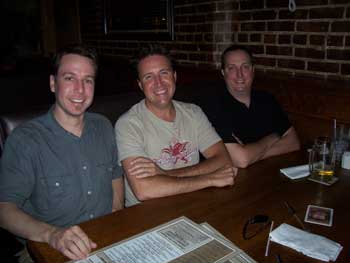 Unfortunately, the hubster was only with me on the first leg of the trip, as he doesn’t have much time off from Boyd’s just yet (March 9th, I’ve got my eye on you!).  Pictured with him are Lance and Eric (all with such handsome baby faces!), good friends from junior high and high school.  The trio played on the tennis team together, and Eric was the best man at our wedding.  This was the start to my super sore throat, as we easily chatted, ate, and drank the evening away at Lance’s former place of employment, Riever’s.   Thanks fellas! 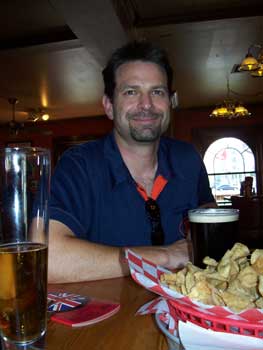 If you’ve been with me for a while, you may remember a certain jerk I referred to back in this post.  Well folks, here he is.  “That Tim Brown,” as my dad used to say.  We got re-acquainted on Facebook late last year, oddly enough, at the hubster’s urging, as I was a bit weary.  I know – the man is a gem.  Anyhoo, we had a fantastic time, gabbing away, eating at my favorite Greek restaurant – Pete’s Central One, spending the afternoon at the awesome Denver Art Museum (love the architecture –  the old from my memory as well as the new, a delightful assortment of sharp angles and lines), and enjoying a cool drink and some crisps at Pints Pub.  A very fine day among friends, indeed. 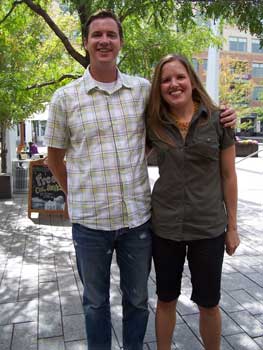 Here’s another fella I’ve talked about before, Steve White, my longest lasting school crush.  We also chatted like mad, zipping through our personal histories of the past twenty-one years.  It turns out I was right about him, too.  All those math skills and not asking me to be his girlfriend translated into a life full of contentment and success with a lovely wife, adorable son, a passion for cooking, and a career in advertising.  I could not be happier for him. 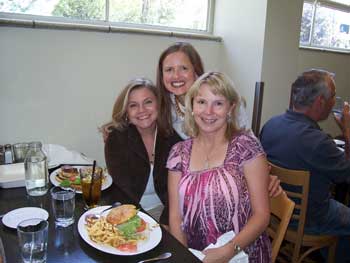 Finally, some ladies!  Stacy and Kari.  We have yet to figure out why we weren’t best friends in high school, as we have so very much in common.  One of those mysteries of youth, I suppose.  We spent our time at one of the best independent book stores in the world, with one of the best names, as well, The Tattered Cover, and their adjoining, and quite delicious restaurant, Encore.  Of course we chatted gaily, and laughed at each other’s expense, and reveled at how marvelous it is to be in touch again. 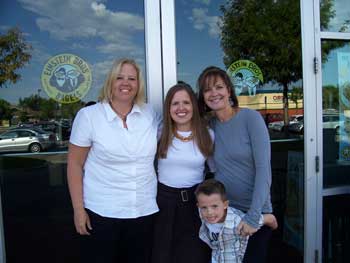 This lovely portion of my visit was the one I never thought would happen.  Dear Maura, on the left, has a very busy and demanding job that takes her to all points in the Denver-Metro area.  Luckily, the stars aligned and we met, along with Chrissie (who shares my passion for yoga, even teaching it) and her cutie pie of a son Sam at a shopping center in Arvada.  Oh, the places you’ll go!  I know I sound like a broken record, but we delighted in each other’s fine company, as well, and laughed at all the people wanting an Einstein Bagel.  I don’t think I’ve ever seen so many desperate souls banging on doors after closing time.  Seriously people, it’s just a bagel. 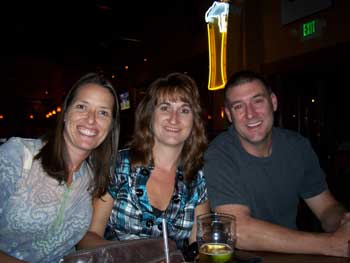 And now, for the big night!  This was the large, though not as large as we’d hoped, group of fine folks from Arvada High School, former home of the Redskins, now just the Reds, as, well, you know, it isn’t terribly kind or PC to say such things.  Ignorance was bliss back then.  This is Ann (my best friend in first and second grade – more about her later), Karen, and Mike.  They’ve all turned out to be such exceptional people.  I am proud to know them. 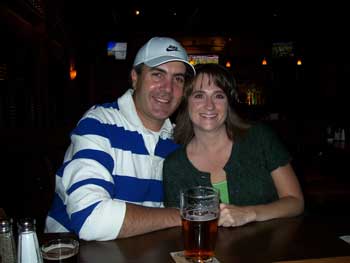 This is a sweet story – Garrett and Adina secretly liked each other in ninth grade and even shared a dance way back when.  Now they are long-distance sweethearts (she lives in Nebraska) after quite a rough and tumble divorce for Adina.  It’s nice to see something wonderful happening between them! 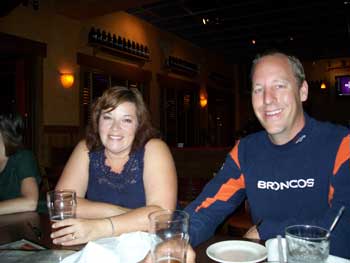 Hello Jessica and Don!  Jessica and I shared a passion for the color black (no pastels for us!) and clove cigarettes in high school, smoking and enjoying infectious chatter at Paris on the Platte in days gone by.  I am happy to say the chatter is just as infectious as ever – she is a good friend.  As for Don, we used to read to each other during our free period in high school.  He was (and still remains) Tim’s best friend, thus serving as interpreter and go-between in our rather complicated relationship.  Bless his heart, he’s one of the kindest men I shall ever know. 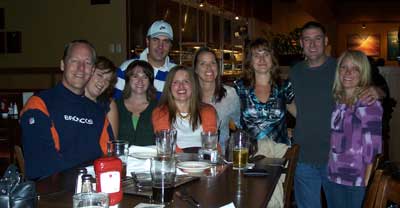 The whole gang, including Mike’s terrific wife Erica on the far right.  It was a highly satisfactory evening for reminiscing  and getting to know the people we are today!