You are currently browsing the daily archive for March 5, 2010.

Kinamand, the Oscars, and an Anniversary 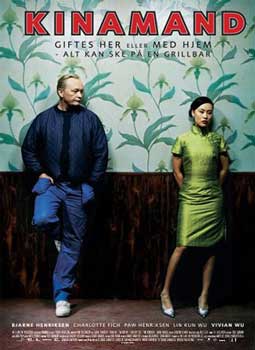 Here’s another hodgepodge post for you, starting with a terrific Danish film, Kinamand.  It follows Keld, a man who can best be described as being in a rut.  He’s a plumber who doesn’t show up for appointments and a man who doesn’t show up for his marriage.  Frustrated by his apathy, his wife leaves him, which leaves Keld to dine at the Chinese restaurant across the street every day.  As he makes his way through the menu, he forges a friendship with the owner, Feng.  After a pipe bursts and Keld completes the necessary repairs, Feng takes him into his confidence and asks Keld if he would consider taking money to marry his sister (very pro-forma) so she can stay in the country.  Initially, Keld refuses, but when his wife asks for a financial settlement under the terms of their divorce, he sees this as an easy solution to his problem.  The two marry and move in together to keep up appearances.  What starts as tense and very pro-forma develops into a tender relationship between a very oddly matched pair, with a few surprises along the way.  Subtle and beautiful.

I am also very jazzed about the Oscars this weekend – the admiring of the dresses on the red carpet, the speeches, and the hosts.  I think Alec and Steve (written like I am intimate with them, oh, my friends Alec and Steve!) will be a fine combination, so I am guaranteed to be sitting in front of the television for many hours Sunday afternoon and evening.  I’ve even got a ballot printed and ready to take notes.  Do you?

As well, Sunday is the second anniversary of Under a Red Roof.  Two years, fancy that!  Maybe we’ll have a little cocktail while watching the Oscars to celebrate.  Thanks for reading!