You are currently browsing the daily archive for February 8, 2012. 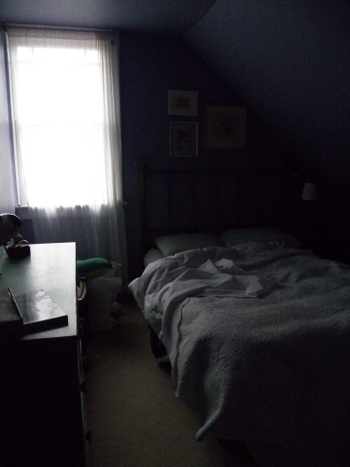 This morning, I awoke twice. The first to two cats in a skirmish over the territory that is our south yard, hollering and screeching, and generally being quite loud. We opened the window and they ran off, saving their scrapping for another hour, preferably when the neighborhood is fully awake and better able to ignore them.

The second was to the blissful sound of rain on the roof and a flood of memories. We spent last night in the guest room, hoping to avoid a repeat of the previous evening. It was windy, I daresay violently so, with all kinds of debris being tossed about and trees whipping and causing us both to have the worst possible dreams. The guest room is a sanctuary, a double bed in a cozy blanket of quiet and on the second floor, under the slope of our red roof. If you ever come to stay, you’ll be amazed at the sleep you have. Perhaps it is something about the hue on the walls, the way you settle into the mattress, or the weight of the down comforter; I’m not sure, but there is something very powerful happening there, making even insomniacs sleep like the dead.

I slept like a child, my back pressing sweetly against the hubster’s, and enjoyed much better dreams, though I do not recall them. When I awoke to the rain, events from our honeymoon, nearly nineteen years ago, came in a lovely torrent. When we met, I was planning a trip to Europe, two months of backpacks on trains and cheap hotels. Once I decided the hubster was a keeper, I asked him along. Then one thing led to another, and it became our honeymoon. We went to England, France, Spain, Italy, Switzerland, Germany, Sweden, and Finland, one of the greatest experiences of my life, to be sure.

My first memory was from the end of our voyage, in Wurzburg (sorry for the lack of an umlaut), Germany. We arrived late in the day, just as everything was closing, and as experience had taught us over the past months, we knew to buy food. There was very little to be had, some cheese and a small loaf of bread that was as dark and heavy as a bowling ball, though it probably tasted slightly better. With that in hand, we found our hotel (I just found it again(!), and it looks exactly the same: Pension Siegel). They didn’t have a double the first night, so we took two single rooms down the hall from each other. Each was very small and sweet and under a dormer, with fluffy down comforters folded in a neat rectangle over the top. I slept like a baby there, too, awoke happy, to rain on the roof, and a marvelous breakfast, which, as it happens, they still serve: hard boiled eggs, toast, bread, plain yogurt (the best I’d ever had up to that point), coffee, juice, assorted jams and jellies, and Nutella. Heaven, and probably why I am such a fan of the breakfast bord at Broder.

My next memory was of Segovia, Spain. The hubster and I, despite our marital status, looked quite young, and the very Catholic woman who ran the little hotel did not want to give us a room together, for surely these loose Americans were trying to pull the wool over her eyes. We smiled and pleaded and showed her our wedding rings. She said something incomprehensible in Spanish and wagged her finger at us before finally relenting. She escorted us to a room with two twin beds that, with a flourish, she shoved together. She then made a point to adjust the crucifix on the wall before kicking us out, so she could have her siesta in peace. We wandered, wishing for our own siesta, and found a tiny market where we bought queso con gambas and ate it on a bench near the aqueduct, laughing at the beauty and absurdity of it all.

My final memory is of Tours, France. After a very long day of riding rented bicycles to see castles:Langeais, Viillandry, Luynes, we ate a discounted bag of pain aux raisins (yum!) and drifted off to sleep. Sometime during the night there was quite a commotion, so we went to the window to look. There was thunder and lightning, as we’d expected, but there were also scores of tanks and jeeps rolling down the street, like we’d journeyed back in time. C’est la guerre! Were it not for the fact that we were both at the window, alive and very much awake, we might have thought it was some potent dream, though it does remain a mystery.

It’s funny the ways I carry these memories, or any memory, really. Some are so close and need only the slightest spark to dance before my eyes. Others are like rare treasure, which require a map, compass, and a certain mental acuity before digging scores of holes to find the tiniest of fragments that need further assembly. Either way, I am glad for them, glad I’ve so many, and that, if needed, I can utter the words queso con gambas, take a bite of sturdy bread or pain aux raisins and be twenty-two again, short haired and cross-legged on a hotel bed, and dreaming of a beautiful future with the hubster. Life is good.