You are currently browsing the daily archive for February 13, 2012.

February 13, 2012 in Being, Thinking, Watching by Colleen | Permalink 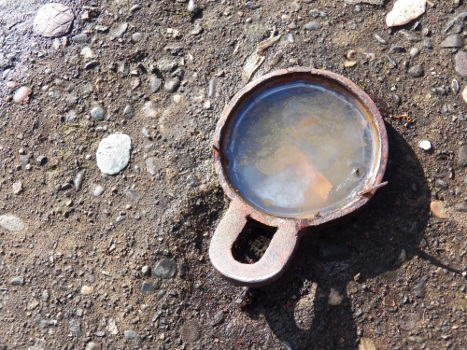 A few weeks ago, I was walking downtown when a young homeless guy seated under a tree was asking passers-by if he was really there. “Do I exist? Do you see me?” As far as I could tell, no one acknowledged him. I was in the right mood, smiled, nodded, and said, “Yes,” as I carried on. He hollered, rather cheerfully, “Thank you for the beautiful smile!” at my back.

The exchange reminded me of a book I read probably ten years ago, Neverwhere, by Neil Gaiman, in which a man saves the life of a street urchin and enters the shady world of the underground, where his mere act of acknowledging her presence obliterated him from the sight of most Londoners. It further got me thinking about my own behavior. I do not always see the homeless man because that would make me…complicit, responsible, disappear into his world? If I don’t see it, I can protect myself. That pain there, that violence, that poverty, with eyes averted, I will not feel it. It or he or she will not touch me, will not become an albatross about my neck. I can move on with a wink and a smile, as if it never happened.

Then, a couple of nights ago, I was reading the work of Pema Chodron (yup, still at it), and she said, “Compassion practice…involves learning to relax and allowing ourselves to move gently toward what scares us. The trick to doing this is to stay with emotional distress without tightening into aversion.”

Well, shit, that’s exactly my modus operandi. Going to scary places, especially my own, feeling reviled, fleeing or shutting down. The truth is, life is ugly and difficult sometimes, even when it is so very grand, those mountains and molehills that appear out of the ether. What to do? As Supertramp would say, “Take the long way home.”

So I did, in my very Colleen way. I took a meandering path through the pain of others’ lives to get me closer to tackling my own and the everyday, trembling with fear, but without aversion. I watched a fil-um I thought I never ever would, never ever could, Hunger, with my man-crush Michael Fassbender. It details the conditions at Long Kesh prison and the last days of Bobby Sands. Good god friends, it was horrible. Ugly, cruel, vicious, and incredibly sad, no matter which side you take, and I will do no such thing. That was not my intention.

My point was to take it all in, not avert my eyes, as much and as often as I sincerely wished it, and breath it in and out, steady and even. And I did, through the fear of car bombs, men being beaten to within an inch of their lives, violently shot, and the hunger and waste of a beautiful man’s body. I breathed and sighed and wept and opened my heart w i d e.

I did it and can do it with whatever wretched refuse I encounter. The trick now is to remember and have patience.