You are currently browsing the daily archive for October 11, 2015. 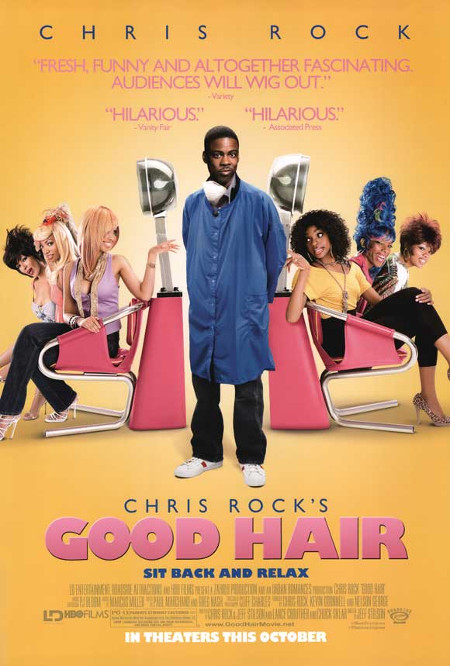 Good Hair – the crazy things women, and a few men, do to and for (?) our hair, myself included. Once a year, from the age of eleven to sixteen, I got a home perm, my mom spending well over an hour rolling what seemed like a million pink and turquoise curlers at the dining room table, my eyes and scalp burning, and me, save the very LAST time, wholly disappointed at the results.

In this documentary, Chris Rock travels the globe to reveal the secrets and truths behind black hair and its care – relaxers, wigs, weaves, the whole shebang. Frightening, serious, and sad, the film brings up interesting questions on the value of hair, and how the majority of what is perceived to be “good” by the black community is far from its natural state. Sodium hydroxide, the primary chemical used for straightening, completely dissolves an aluminum can in about an hour, yet people put it on the heads of girls as young as three and often continue the practice over a lifetime. It’s a nine BILLION dollar a year industry that keeps a lot of mom and pop shops in business and poor women in debt, with weaves and wigs, good ones, at least, starting at $1,000, and many women spending thousands each year to keep it all up. The saddest part is the fact that many black women look down upon those with natural hair, saying they aren’t as serious or professional for forgoing the chemical processes. I happen to love it when a black woman rocks an afro, and after this bit of education will be even more hearty in my compliments to them!

Rush: Beyond the Lighted Stage –  Never a big Rush fan, though I can sing along to more than I would have guessed, I started this documentary with the intention of watching it for five minutes, just until I saw what they looked like. An hour and a half later, I found myself at the end, happy and weeping at a quintessential underdog band story. Largely misunderstood by critics and the general public, but with a cult following, the trio play with passion and curiosity, to their hearts, their fans, and each other. Bravo. 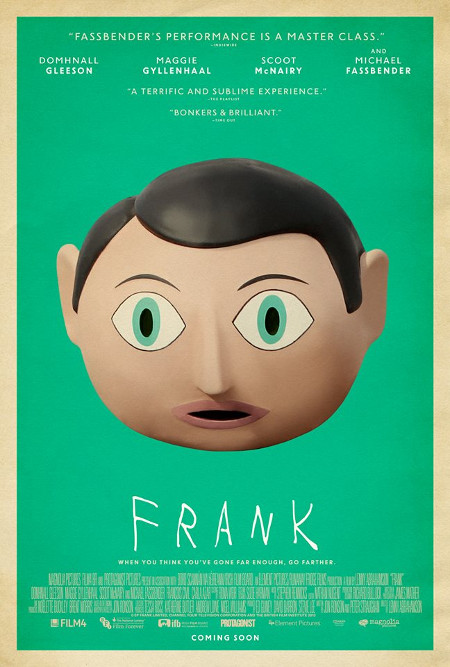 Frank – this movie explores the odd and surprisingly lonely world of being in a band of angry misfits: the thrills, disappointments, and often painful work of leading a truly creative life, oh and having a leader who wears a fake head at all times. 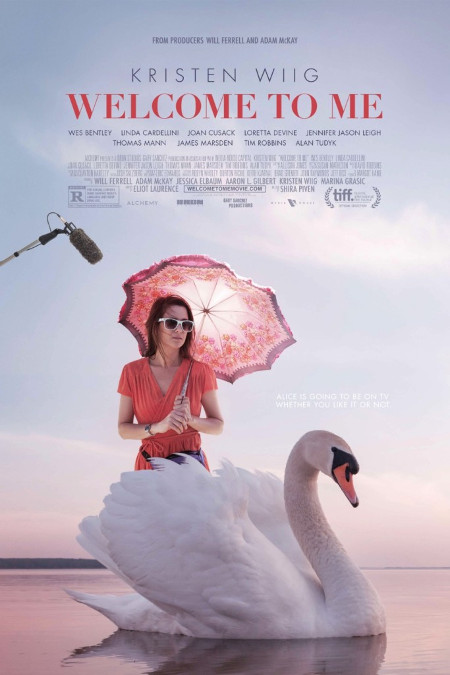 Welcome to Me – Alice (brilliantly played by Kristen Wiig) suffers from borderline personality disorder and spends the majority of her time in her apartment watching television.  She wins the lottery and decides, a la her idol Oprah, to create a show that revolves entirely around her. Sooo good!

The Paper Chase – Explore the highs and lows of being a first year Harvard Law student in this classic movie from 1973. Super handsome Timothy Bottoms and that hair! Lindsay Wagner before she was the Bionic Woman! John Houseman! The story ain’t too shabby, either.

Get Low – A hermit with a mysterious past arrives in town to arrange a funeral party while still alive, raising fists and riling imaginations. The truth is never as bad as we think. 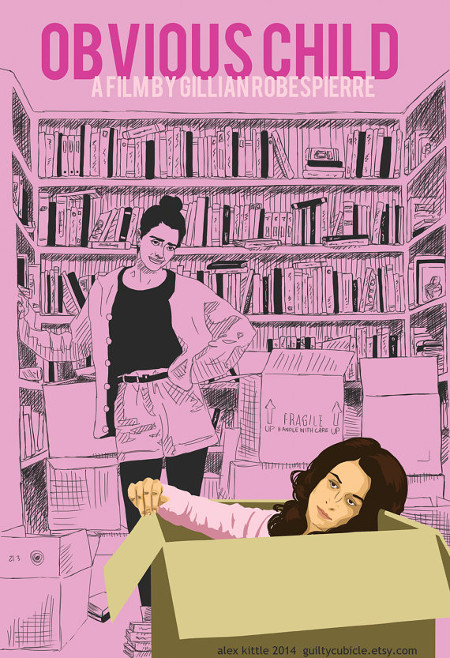 Obvious Child – Oh, golly. A young comic struggling from a break-up and the loss of her job discovers she is pregnant after a one night stand. Though the decision to have an abortion comes easily to her, the repercussions are lasting. Wherever you stand on the issue (I find the practice abhorrent and laws dictating what I do with my body equally so), the film is a thoughtful examination, often times tender and funny, of one woman’s handling of her unplanned pregnancy. 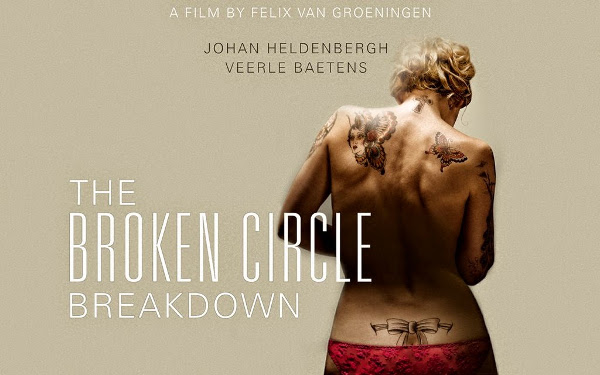 The Broken Circle Breakdown – Love at first sight. Tattoos. Singing and guitar picking. A love for America. A difference of faith and one couple’s struggle to reconcile a loving world with a child who becomes gravely ill. This is a stunner and a heartbreaker with a fantastic soundtrack. 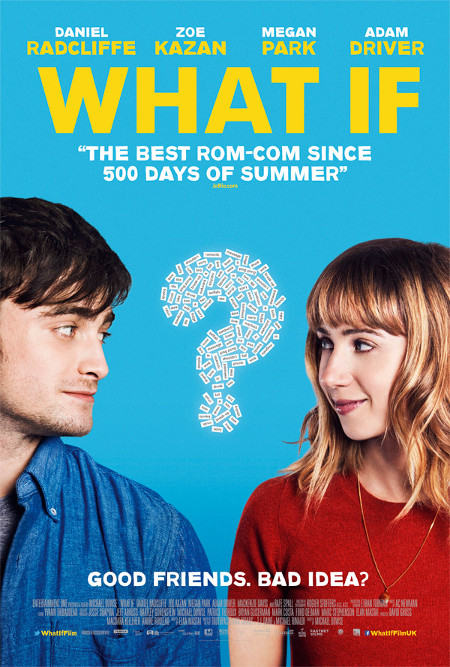 What If – A fun romantic comedy with some very lovely animation. Enough said. 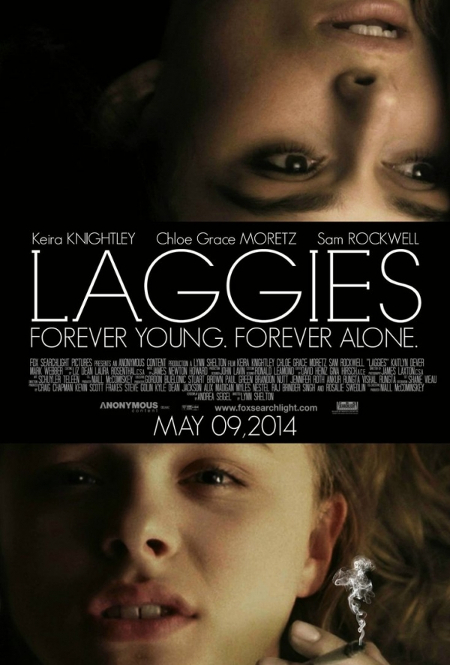 Laggies – An aimless woman in a stifling relationship escapes to the home of a new teenage friend in hopes of reassessing her life. Fun and thoughtful, with Sam Rockwell, one of my favorite actors. The man’s never made an indie movie I didn’t like. Word.