You are currently browsing the monthly archive for June 2008. 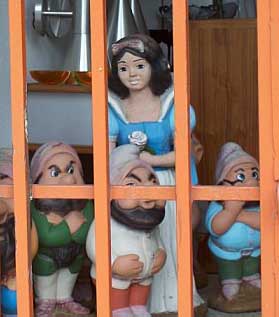 I had a compulsion,

From my little prison,

To write some fiction

Of words held so often in jubilation!

Yet, I wait in anticipation

For the next line in my creation.

For I have lost traction,

And now have to cease without proper action. 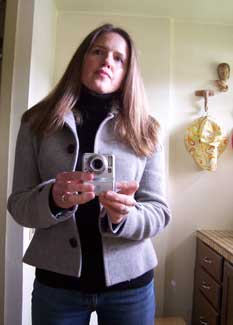 So, this is what I wore on Friday  – a wool turtleneck sweater and a wool jacket.  I was still cold.  Friday was June 6th.  As you can imagine, I was awfully disappointed. 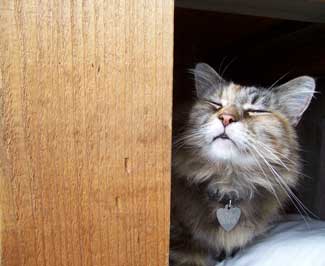 On a happier note, here is our little Princess Buttercup.  Look at that sweet face!  She is lying in the cat house Gregory made.  The cats were not actually using it, and I thought we should get rid of it, but then, whaddya know?  The little miss suddenly had to take a nap in it.  So, it stays.  Cutie. 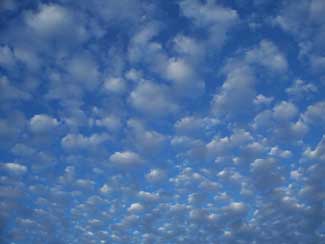 Finally, how gorgeous is this sky?  We had a bit of luck yesterday, sunny and warm enough to work outside all day.  This was my present as I sat in the back yard to admire the fruits of our labor.  I weeded, trimmed a couple trees and bushes, cut up branches, dead-headed the iris, and made some peony bouquets for the neighbors, so nice after Friday’s turtleneck disappointment.

Gregory mowed the lawn, did some painting, finished a brick border, and made a little door in the north side of our fence for the cats.  Really, the cat, Paris, because she has an awfully hard time getting back into the yard once she’s exited from the door made expressly for her on the south side.  Why a little door?  Well, that cute kitty from the photo above does not scale fences, no siree, not becoming of a princess, I suppose.  Anyway, she must have thought that the first door was exit only because she would cry and cry in the front  or by the north gate to let her in.  As soon as we showed her the new spot, she went around and around the house in a loop at least four times.  I was weeding on one side and Gregory was laying bricks on the other and we would holler with delight at each other, “Here she is again!” 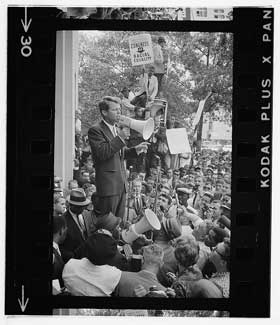 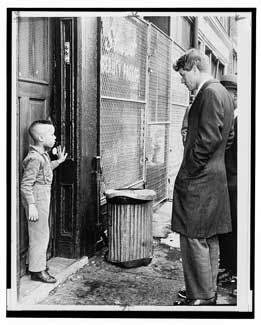 When I was a kid, and my dad or brother would buy a new album, they would play it over and over again, driving me nuts, wishing I could yell “fire!”, or turn off the power to get it to stop, but realizing that even if I did, the effect would last but a minute before the truth was discovered.  So, unless I wanted to go to the park, which, generally, I didn’t, there was no escaping it (until I bought my car – sweet freedom!).  The music came into my bedroom, the bathroom, upstairs, and even outside on warm days, as we Sohns are not shy about volume in voice or otherwise.  I was, as they say, surrounded, no choice but to surrender.

I just could not fathom why anyone would want to hear something, even if it was good, so many times.  All that repetition just made me crabby and desperate for industrial strength ear plugs.

That was then.  Now I get it.  Thanks first to rediscovering Astral Weeks by Van Morrison about five years ago and to Sam Beam, of Iron and Wine, I really get it.

An aside for the G-Man.   When we lived in Denver, they would sometimes show the fans outside McNichols Arena (a.k.a. Big Mac – now gone) after a concert on a slow news night.  On one such night after Van played, a woman who had likely partaken of some illicit substance, screamed, “Van Morrison is pure love!”  As a result, neither one of us can say his name without adding that as well.  Good times.

I am digressing.  I do that.  Anyhoo, I got a taste of the repetition with Mr. Pure Love, and then came to a full understanding with Iron and Wine.  This is rock steady, keep on wiggling in my chair, singing softly along kind of music.  I love to listen to Sam Beam’s gentle voice when Gregory and I play cards.  More often, as my friend Sarah will attest, this is sewing music.  It’s just so perfectly suited to stitching.

I put one cd on, and as soon as it is over, the next.  I can do this on a loop for hours, never ever growing tired, just stitching along, but often sitting in silent amazement when a disc is over.  How could that be?  Where did the time go?  Wasn’t I just singing “Sunset Soon Forgotten”?  Golly, that’s only the fourth song.

With Van Morrison (pure love!) and Iron and Wine, it is like they whisper the lyrics in my ear, and while I hear them and whisper back, I dream of myself and my place within the songs, in fields, under trees, peering through a crack in the door.  What can I say?  Magic.

Practically Perfect in Every Way 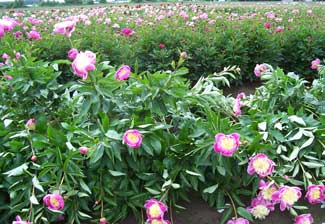 Mary Poppins?!  No, peonies!  I figured that after a post about rejection I’d better write something cheery.  Nobody likes too much gloom, particularly moi.  Eek!  That just made me think of Miss Piggy and how she’d draw it out, moooiii?!  I never liked her, a bit too selfish for my taste.  Poor Kermie. 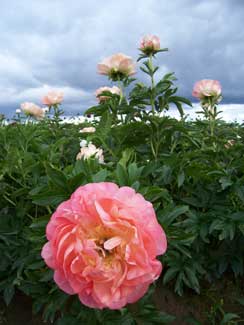 Anyway, I digress.  This afternoon, after cancelling this morning because it was pouring buckets, then thinking I might go on Saturday, and calling my friend Bridget twice, I finally went to the peony farm.  I made a little pit stop in Tualatin to pick up my bestest buddy Gregory, and we were on our way!  The skies were grey and wind chilling, but it did not rain, thank goodness. 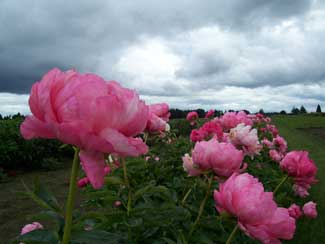 I was not disappointed, but I don’t need to tell you that.  Look at these delightful blooms!  Row upon row of beautiful flowers in many colors and hues – a veritable feast for the eyes!  Had there not been such a breeze, I would have wandered around a bit more taking in their gorgeousness and a few more pictures.  I know that I’m gushing, but I looove peonies (though the G-Man was pretty impressed too).  They are neck and neck with Poppies in my favorite flower horse race.  Still in the race, but a bit behind are dahlias, lilac, and lavender.  Pur-dee. 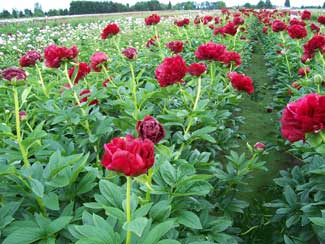 For the locals, Adelman’s is about a 45-50 minute drive from my house, so it requires a little planning, but, if you like peonies, it is well worth it.  The people are super nice and helpful and, as I’ve already said, the selection is fantastic, especially if you are particular in a Goldilocks or Sally Albright kind of way.   Here’s what I want – a red, a true red, nothing pinky-red, but nothing too ‘bomb’ like either, or too frilly, and nothing that needs staking.  Thankfully, I didn’t need to verbalize this to anyone except Gregory, because after fifteen years, he’s okay with my idiosynchrasies.  We just wandered until I found one that was just right (and then two more).  They even gave me a bouquet of Sunny Girl and some fertilizer to thank me for my purchase.   How nice is that?

As an aside for all of you who might entertain the idea of taking along someone who might not be the greatest fan of the beloved peony – just across the overpass is a perfect roadside restaurant called the Chalet that is good for bribing.  We noshed on a Philly French Dip and a Turkey sandwich with gravy and cranberry sauce before gilding the lily with a slice of coconut meringue and peach pie.  That’ll do pig, that’ll do.

And what, you might ask, did I buy before all the eating?  A Coral Charm, Buckeye Belle, and Bartzella, but, silly me, I neglected to take a single photo of them.  I assure you, they are lovely, just lovely.  I can’t wait to cut a bouquet next summer.  Thank you Adelman Gardens Peony Farm!