You are currently browsing the daily archive for October 16, 2009. 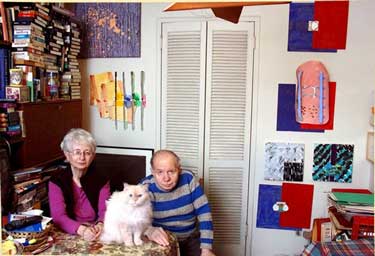 I am spelling out the following number for emphasis: Four thousand seven hundred eighty-two.  This set of digits is hardly impressive when one considers population, drops of rain on my red roof, or annual salaries in America.  However, when one ponders the fact that it is in relation to  how many works of art were amassed by Herb and Dorothy Vogel in their tiny New York apartment over the course of forty years, then it expands into something nearly unfathomable.  Holy smokes – 4,782!

The absolutely adorable couple (they still hold hands and find each other cute), a now retired librarian at the Brooklyn Library and a postal worker, began collecting in order to follow what was, at least initially, Herb’s passion.   He worked nights at the post office, would sleep a few hours, and then go to the library and read everything he could about art, as well as take a painting class or two.  Dorothy, wanting to share in her husband’s interest, decided she would paint, too.  Soon, the walls of their apartment were covered in their work, but then, in 1962, after realizing they could live humbly off of Dorothy’s salary and purchase art with Herb’s, they marched forth with gusto, visiting galleries and studios all over the city and purchasing inexpensive works by unknown artists.

Their criteria were simple – they must like the piece, be able to afford it, and it had to be carried via foot, bus, or taxi to fit in their apartment.  They weren’t looking to collect anything just for the sake of it; they had to love it as well, and love they did.  They covered every possible surface with art: walls, ceiling, floor, amassing piles and rows, squeezing it in among their fish, cats, and turtles, a wonder of physics if the truth be told.  Dorothy remarked, “Not even a toothpick could be squeezed into the apartment.”  She was right.

In a bold and quite generous move, the couple decided to donate their entire collection to the National Gallery of Art in Washington D.C., the site where it all began, the first museum they visited together as husband and wife.  Of all the museums clamoring for their collection, all of them willing to pay princely sums, I might add, the Vogel’s chose the National Gallery because quite simply, as Americans, it belongs to everyone.  The works will never be sold and anyone can visit, for free, furthering their belief that wonderful art can be both affordable and accessible, just as it was to them.

It is a marvelous portrait of love – for each other and modern art.  It made me weep at how having a benevolent spirit and following our passion is rarely about how much money we have but what we choose to do with it.