You are currently browsing the daily archive for March 8, 2010.

Such a Good Feeling 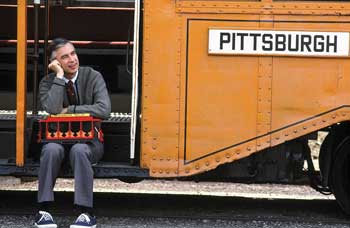 Ahh, Fred Rogers.  I once won a scoop of ice cream for knowing his first name.  I think I chose cinnamon.  Another time, at the same scoop shop, I knew that “Video Killed the Radio Star” was the first song played on MTV.  See Darin, trivia can serve a very special purpose, beyond board games.  Though, of course,  the name of the ice cream shop escapes me.  It was on 15th and Market in Denver.  Anyone else remember?  Anyone?  Bueller?

Anyway, my fondness for the man goes beyond the fact that he helped me score delicious ice cream.  I wish I could pinpoint exactly what it is about him.  His sweaters were pretty terrific, all knitted by his mother, by the way.  One is even hanging in the Smithsonian.  I made a special trip to see it when I was there and was surprised by it’s size.  It’s funny, most people I have heard are surprised by how petite famous people are in person (We saw Kelly Ripa in New York, and she was tiny), but I had the opposite reaction.  For such a soft spoken man, his sweater seemed huge.  Which, I suppose, is appropriate, considering the impact he’s had on the lives of so many, including me.

Perhaps, it is the fact that he truly believed in children, and adults, too.  He loved people, kindness, music, and the joy of discovery (did you ever see him tour a factory?).  He was never embarrassed either, willingly admitting when he didn’t know or understand something.  A model citizen in blue sneakers.

p.s. The story floating around the interwebs about him being a war hero aren’t true, nor are the tattoos.  Though wouldn’t it be cool if he had one of a zip-up cardigan?!