You are currently browsing the daily archive for August 20, 2010.

We’ve been rather fortunate to have seen a fine series of movies Under a Red Roof lately.  I love that.  There are few disappointments as severe as a film gone wrong.  No possibility of that today, however, no siree. 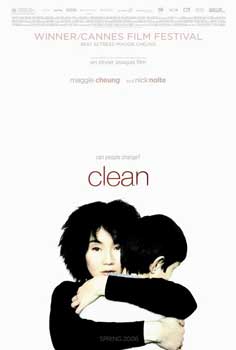 First off is Clean.  Maggie Cheung (who won a best actress award at Cannes for her portrayal) plays Emily Wang, bitchy, arrogant, spoiled heroin addict and girlfriend of fading musician Lee Hauser.  They have a child, Jay, who is being raised by his grandparents while they waste their lives driving around in an ugly sedan, playing music when they can, arguing, and, of course, scoring heroin.

Emily’s life is upturned when she and Lee get into yet another argument and she flees the scene to shoot up.  When she returns the following morning, the police surround the shabby hotel.  Lee is dead.  Emily serves time for being the source of the drugs that killed him and exits entirely directionless, save the hope that she will one day get it together so she can reunite with her son.  It is an honest and oftentimes painful look at the slow progress of an addict trying to change, with great music and locations – from the stark beauty of an oil refinery in Canada, to the streets of London and Paris.  As well, and in a pretty surprising role (at least to us), Nick Nolte plays the grandfather – tender, caring, and even keeled.  Well played, one and all. 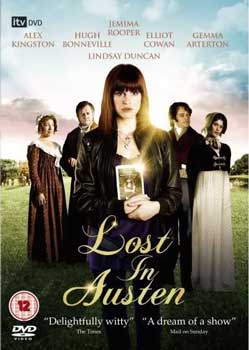 Quite on the other side of the spectrum is Lost in Austen, a hysterically funny adaptation of Jane Austen’s Pride and Prejudice. The story follows Amanda Price, a somewhat hopeless and thoroughly modern romantic who tires of her boorish boyfriend’s ways, preferring to spend her time cozied up with the pages of her favorite novel.  All goes Pete Tong when she finds Elizabeth Bennet, the heroine of said novel, coming out of a secret passage in her bathroom.  What ensues is a delightful voyage into the countryside as Amanda tries and fails mightily to keep the novel on course while also coping with the technology (rather lack of) in 19th century England.

It has a stellar cast, some marvelous twists, and, of course, the witty repartee one expects in such an undertaking.  Here too, is a sampling of the lines that kept me in stitches:

Oh, you have standards, pet.  I hope they help you on with your coat when you’re seventy.

There really are ladies who steer the punt from the Cambridge end?

The drawing up of phlegm through the nose is not the action of a lady!

Brava, Miss Price!  And whenever life is gettin’ me down, I shall be sure to go ‘downtown’.  Eh, Darcy?

Okay, I’ve cleaned my teeth with chalk and shaved my legs with some sort of potato peeler.