You are currently browsing the daily archive for June 19, 2009. 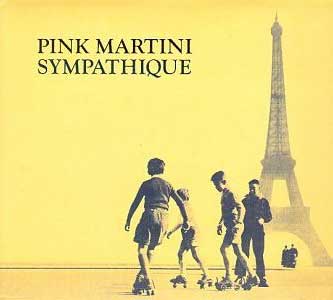 Holy smokes!  Is it Friday already?  Where did the week go, anyway?  I hope the weekend holds something special in store for you.  We’ve got big plans to fix the toilet.  Yep, I said the toilet.  I bought a new seat and the wax ring is starting to leak.  Please cross your fingers that it seals on the first get-go because moving a toilet is no fun – heavy and awkward.  At least we’ve got good music to listen to while were working, however, as I’ve deemed the weekend a Pink Martini.

Pink Martini is the sound of brass, the thrumming of strings, drumming of drums, tinkling of ivory, and a delightful voice that makes me so very happy, a dizzy, giggly, effervescent kind of happy of the highest order, and this, Sympathique is their first and my very favorite album.  It starts with a flourish of harp strings and the thrill of China’s glorious voice on “Amado Mio,” takes us through a marvelous party of sounds and toe taps before ending the evening with what else, a sweet “Lullaby,” of course.

For Portlanders like myself, Pink Martini is extra special, because far from offering awesome lyrics, stellar singing, and highly danceable songs, they’re also our very own, the local band gone gold around the world.  They have no fear of language or unusual instruments, singing in French (Beh oui!), Spanish (Si!), Arabic (Inshallah), Japanese (Arigato), and more. They’ve also got incredibly big hearts too, playing benefits for many local charities, including one of my favorite organizations, REACH Community Development.

Even if I weren’t from Portland or a supporter of REACH, Pink Martini would still be on my list of favorites.  They’re that good.  Oh, and have I mentioned how fantastic they are live?  If you ever have the opportunity, grab it with both hands because the band does not disappoint.  They’ll have you singing at the top of your voice and wiggling wildly in your seat.  Well, at least that’s what happens to me!

Have a lovely weekend…