You are currently browsing the daily archive for January 14, 2014.

Pariah – As difficult as it can be to navigate the waters of high school, imagine the added burden of being lesbian in a community generally not accepting of gay people. The poignant rendering of crushes and confusion, love and family, of caring for those who matter most, and being rejected by them, too. It broke my heart and put it back together again.

Iron Maiden: Flight 666 – This was not my top choice, by any stretch of the imagination, but the hubster l o v e s them, and I love a good documentary, so there you go. Watch the band tour the world in their very own 757, piloted by lead singer Bruce Dickinson (No kidding! And he’s quite serious about it, too) and called, rather appropriately, Ed Force One, after their mascot of sorts, if you aren’t in the know. These are terrific men and musicians. Case in point, to quote guitarist Janick Gers, “If you like our music, God bless you. And if you don’t like our music, God bless you, too.” All class. They care deeply about each other, the music, and their legions of fans. I had no idea there were so many. From Mumbai to Columbia (!), they sell out shows, delivering joy and hope along with some seriously rockin’ tunes. 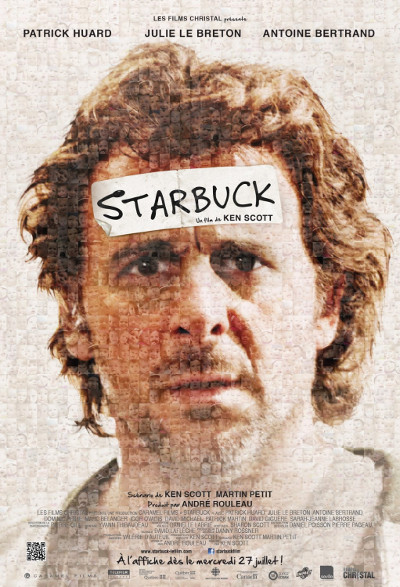 Starbuck – Kindhearted and a bit of a baffoon, David Wozniak is in a bit of a bind. His girlfriend is pregnant, he owes some serious money to a loan shark, and he’s just learned that he is the father of more than 500 children, via sperm bank donations as a youth. Determined to change and be a good parent to his unborn child, he begins to secretly help the 142 now adult children who’ve filed a class action lawsuit against him to learn his identity. Silly and sweet and very touching, too!

Upstream Color – A woman comes under the spell of a thief and loses all that she has, nearly all that she is, too. Later, she meets a man on a train with the same affliction. They fall in love and unravel the mystery of their meeting and strange bond. Beautiful and wild and one heck of a mind bender. Oh golly, Shane Carruth, do I ever love your fil-ums!!

Fat Kid Rules the World – Fat kid Troy nearly takes his life by jumping in front of a bus. His effort is thwarted by Marcus, a drug addict from his high school. They become friends and form a band, despite the fact that Troy knows nothing about music or how to play the drums, online gaming being more his shtick. Hijinks, much drumming, disappointment, and redemption ensue. A new twist on an old story, I suppose, and I liked it.

How Much Does Your Building Weigh, Mr. Foster? follows the career of Norman Foster, from his very humble beginning on the wrong side of the tracks (literally) to designing some of the world’s most iconic structures. How I love to see great minds at work. And then there are the buildings, swoon!

The Perks of Being a Wallflower – filled with every possible cliché about being young, gay, depressed, and misunderstood, but delivered in such a fine package that I did not care.

Kon-Tiki follows the true story of Thor Heyerdahl (plus four crew men and a parrot) on his 1947 quest to prove that Peruvians sailed the South Pacific to discover Polynesia. This is a great example of what can be done without the aid of modern implements and a good head on one’s shoulders, however frightening and stressful. As a matter of fact, I kept shouting, “this movie is so stressful!” at the television while we watched. Yeah, I’m dorky like that.

Everybody’s Fine – Frank Goode, bored and lonely after losing his wife, decides to take to the road to visit his four children, though he only manages to see three. Their love is awkward and strange, now that their mother, the glue of the family, is gone, and each, in their own way, lies to him, about who they are, their own lives, and the whereabouts of their missing brother. A splendid tale of coming to terms with who we really are. A side note: the fact that I am now middle aged and that Robert DeNiro sometimes moves and gestures like my dad had me pondering the big questions and balling like a baby, too.

And now, for something completely different –  I was walking behind this couple, heard snippets of their conversation and saw the way their arms were entwined, the way they leaned in and laughed, and it made me so happy to witness. My pace can be fierce and I passed them, nearly all the way, but then I turned and remarked on how adorable they were and asked for a picture. I am so glad they obliged!