You are currently browsing the daily archive for December 4, 2009. 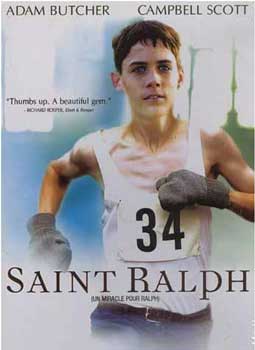 I was certain the bright red Netflix envelope contained the final DVD of season two of Mad Men, so when I saw this film instead, I found myself a bit miffed.  Thankfully, I am rather pleased to say that I got over my pout in a jiffy.  This is one terrific movie!

Ralph, in many ways,  is a typical teenager.  He is a bit of an outcast, save his one friend Chester, frequently the butt of jokes and ill treatment by the boys at school, is mystified by girls, and despite knowing that he is committing a sin (venal or mortal?) he cannot help indulge in pleasures of the flesh (gulp!).  When his mother, suffering from a serious mystery illness, falls into a coma, Ralph finds himself at a crossroads. Not wanting to become an orphan (his father died in the war – presumably Korea, as it is 1954), Ralph is in dire need of a miracle.

After hearing a lecture on saints and miracles in religion class, Ralph decides he will perform one himself  and save his mother’s life by winning the Boston Marathon, despite the fact that he’s only just started to run (as punishment for a multitude of sins).  What ensues is a touching and, at times, hilarious account of his path to Boston.  A great story, full of wit, warmth, and humor – really quite fulfilling.  Five stars!