You are currently browsing the daily archive for April 20, 2011. 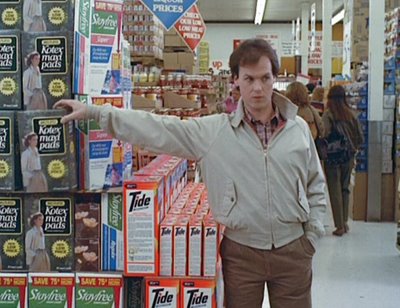 The hubster and I watched Mr. Mom earlier this week, a video tape which, as kids, my brothers and I literally wore out from watching it so much.  When bits of the storyline kept popping into my head, and I began to wonder if it really was worth wearing out a video tape as a tween-teen, I could not help but put it at the top of the Netflix queue.  Unlike Meatballs, I did not cringe in horror and immediately stop the train wreck from polluting my mind with garbage.

If you don’t know the story, Jack is laid off from a job in the auto industry and his wife, Caroline, finds work before him.  He stays home with their three kids, going through all the phases: overwhelmed and clueless; chubby, bearded, and obsessed with The Young and the Restless; eventually rising to uber-efficient power Dad status.  We also watch the travails of a “pretty” mom with a job in the early eighties.  I don’t think it could be much more politically incorrect.

We watched and laughed, grateful that you can go back, sometimes.  Though it had its cheesy moments, it was still funny and sweet, and made me remember my long ago days with a “woobie,” though mine had no fancy title.  It’s a great cast, too, all perfect for their roles – Michael Katon, Terri Garr, Christopher Lloyd, Jeffrey Tambor, Ann Jillian, and those adorable kids.

Which reminds me, when I worked at the Gap, I sold a leather jacket to Ann Jillian.  She was super nice!

I might as well keep it going.  Here are all the “famous” people I can recall  seeing or meeting:

Jimmy Stewart – I ditched a day of college to meet him at the Tattered Cover – totally worth it!

Andy Garcia – filming a scene near the Tivoli in Denver.

Will Smith – filming a scene in New York.

Kelly Ripa – walking her little boy in a stroller on Prince Street in NY.

Gary Hart – I rode an elevator with him.  There was NO monkey business.

David Wilcox – twice – once in Denver at a signing and once after a show in Boulder.

Quiet Riot – back stage at Big Mac (that truly dates me doesn’t it?).

This one is going waay back – Steve Railsback from a movie called The Golden Seal with my very first BF from elementary school, Ann.  I think the seal was there too!