You are currently browsing the daily archive for August 8, 2011. 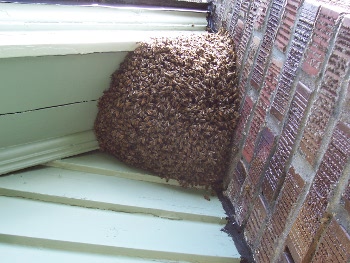 1. Um, yes, I can spell, and, 2. This will make sense eventually.  I pondered a more silly title, like “brama,” but then thought the better of it.  People will come looking for a misspelled chicken (and a rather handsome one at that), the Hindu god, or think I’m some nut going for the Brangelina word play; bless their hearts and her bad acting, but it’s quite enough to see them on the cover of the tabloids standing in line at the supermarket, thank you very much.  So this title I could settle on, which also lets you know how much I think about such things.  It can be a whirlwind and an occasional maelstrom in this pretty little head. 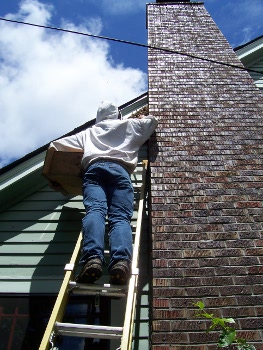 Speaking of maelstroms, demolishing a bathroom is loud work.  Lath and plaster walls take quite a bit of force to remove, even when there are three fine young specimens of maleness wielding tools.  For two whole days, it was boom, boom, boom, boom,boom, boom.  It was overwhelming.  Then, during a nice stretch of quiet, while Leon the electrician was repairing some uber-shoddy work (done by a previous homeowner who fancied him/herself an electrician when idiot danger monger is closer to the truth), there was a boom so loud and fierce that it quite literally rattled my insides, followed by an equally profound silence.  My heart caught in my chest as I envisioned poor Leon lying dead in the next room.  Mercifully, he bellowed, “What the heck!  I did nothing!” a second or two later, and I could breathe a sigh of relief.  We dashed outside the house to find the source of the sound and heard the the postman holler, “It was a bird!” before seeing the body of a Starling lying motionless at the foot of the utility pole.  Somehow it managed to make just the “right” connection on the transformer, losing its young life and the block our power, for the next two hours. 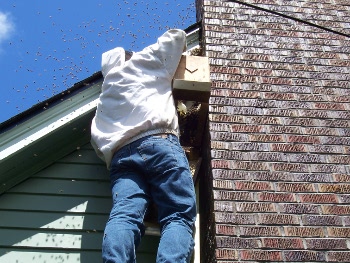 The following day, when the hubster left for work, he tried to ease my mind after the previous day, and said, “Today will be quiet; they’re just digging a hole.”  It was true, a simple, two foot deep trench for our new water line (the other being eighty years old and in definite need of replacement) was in store.  But, as you’ve surely surmised from the title of the post, it was not meant to be.  I sat on the back porch, happily reading and enjoying the steady chirp of birds, when suddenly I heard a hissing sound, followed by the smell of rotten eggs that can mean only one thing.  I bolted out the gate to see our lone trench digger in a panic and my fear realized. The gas line had, indeed, been cut.  Five minutes later, the fire department arrived, sirens blaring, and I had the utterly surreal experience of watching these men put up caution tape, block off our street with three trucks, and enter my house in their full gear while being told I must remain at least fifty feet away.

I wandered a little, heart aflutter, informing the neighbors of what happened, and generally feeling strange.  I was neither afraid nor sad.  I think the right word might be detached.  It was hot, so I took shelter in the shade of my neighbor’s tree.  I admired the work of brave fire fighters and NW Natural employees.  I admired my house.  I appreciated seeing it from a different angle.   It’s funny how little we step away from our homes and see them as others do.  I thought it looked nice: the paint color, the red roof (of course), the myriad plants and trees dug into the ground by myself and the hubster.  That is our home.  I can’t go in it now, but it’s okay.  Everything will be fine.  The right people are here, helping.  Then my eye drifted to the chimney, and I saw the subject of the pictures. 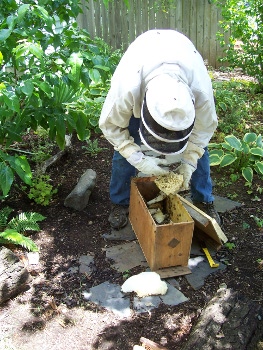 Bees.  A single mass of individual energy, a gentle expansion and contraction of wings and bodies.  I felt so lucky and blessed to know they chose our house, eager to see them up close.  And so I did.  Once all the danger had passed, and the fire fighters waved their final goodbyes, I came to a spot and watched my beloved bee friends.  They came and went in an endless stream, their humming bodies maintaining the same general pattern, yet moving enough to reveal the evidence of habitation.  They had made comb. Though I am a bee lover, and would one day like to have my own hive, I knew that the side of my house would not make a suitable home over the long haul.  I made the proper inquiries to the Xerces Society and the Oregon State Beekeepers Association, and the following morning Pavel and Ivan arrived at our door.  Pavel is sixteen and an avid, however nascent, beekeeper, and our hive his ninth rescue.  Ivan is his father and serves as driver and helper. 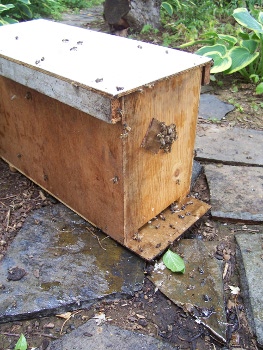 Pavel made quick work of removing the hive from the eave, but, rather unfortunately, since the bees were so happily ensconced, (they’d probably been there for a month – I had heard them, thinking them something else, but never saw them), there was so much honey that it was rather messy, and the queen got lost in the shuffle.  During the time that Pavel and Ivan searched for the queen and we all hoped she was, indeed, alive, there was much learning and cleaning.  Learning about the intricacies of a hive and beekeeping in general.  Cleaning honey and comb, gently scraping up drenched bees and getting them near their sisters to be cleaned by them (such tenderness).   Oh, and there was a little bit of eating, too.  I took a small piece of honey-filled comb, and we enjoyed it over the next couple of days.  It was light, nearly clear, and the best I’d ever tasted.  A lovely reminder that though life sometimes brings drama in the form booms and frights, it is ultimately sweet like honey.