You are currently browsing the monthly archive for June 2010. 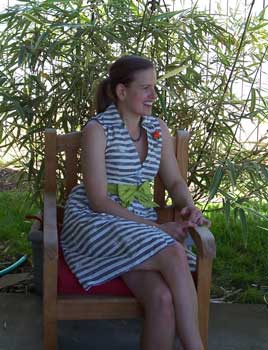 Hot enough for dresses (thanks Martha), cool enough for sleep, summer has finally arrived in Portland!  I love my perch on the porch.  I bird watch, read, sometimes sleep, swoon at the flowers and the achingly beautiful sky.  By daylight or candlelight, life is fine by me.

I hope you have a marvelous day, dear readers!

Hello friends –  Welcome to The Oregon Garden!  Located just outside the picture post card town of Silverton, it’s about an hour’s drive from our red roof, and a pleasant one, to boot.  My friend Rob and I journeyed there a few weeks back while he was in town.

With eighty acres and a myriad of different gardens, there is a whole lot to see.

This photo and the yellow flowers in the one above are part of the eco-roof, a great way to filter rain water and keep a structure cool.  I like the look of the plants, too.

This is the cottonwood forest.  These trees are crazy tall, something like a hundred feet, and grew over a very short period of time – most impressive Obi Wan.

Funny that I should type that, for Rob, my fellow traveler, is a huge Star Wars fan, probably the biggest I know.  He even has a super cool Jedi costume, complete with light saber.

These two pictures are from the conifer garden.  The needles on both were surprisingly soft.

There is a tram at the garden, and though I would generally pooh-pooh something of this ilk, I was glad we took it.  One, it is nice to get an overview of the garden before deciding on specific areas to explore.  Two, the driver was a cute and friendly retiree with many funny anecdotes.  He also highlighted the best places to get married, this series of pools being among them.  I have to admit that the light was awfully romantic.

I think these are the seed pods of a sweet gum tree, but please don’t hold me to it.  Whatever they are, I like the look of them.

Always stop to smell the roses.

This was my favorite part of the garden.  It is an oak grove that dates back more than four hundred years.  Can you imagine living that long?  What a testament to the power of nature – so beautiful and inspiring.

Daisies are such happy flowers.  Are you smiling yet?  Go ahead, it feels good.

Oh deer.  She tried to pretend she was a statue, but we knew better.

I love this whisper of a flower.  I almost expect it to turn into a sweet fairy.  May I have three wishes?

We’re almost at the end of our visit.

And now, for a shout out to my traveling companion:   Thanks for always being up for adventure, for your kind and generous spirit, for your marvelous humor and taste in music (Wilco!), your creativity, but mostly your friendship.  You’re a keeper! 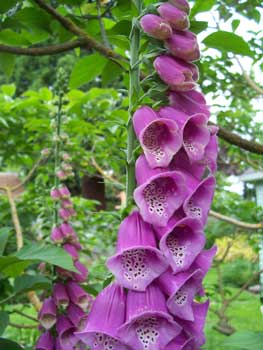 Have patience with all things, but chiefly have patience with yourself. Do not lose courage in considering your own imperfections, but instantly set about remedying them — every day begin the task anew. 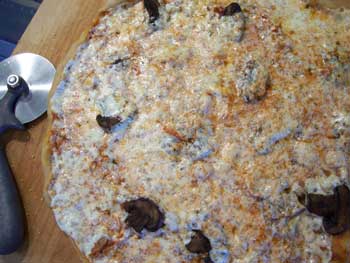 Two bits of deliciousness for you this morning, pizza and cake.  I read an article on pizza in one of the fancy food magazines.  It was rather long and somewhat interesting and highlighted a small town back east that has two very famous pizza joints that have been there a terribly long time.  I guess there is quite an either/or dichotomy going on.  You aren’t, apparently, allowed to like the pizza at both places.  I have to say that I abhor (strong word, I know) rules like this.  I don’t like being told whether or not I should have certain feelings.  This is not up to other people.  It is up to me.  Anyway, as I was reading, I had this rather cinematic a-ha moment.  She and Him was playing in the background and I swear Zooey Deschanel hit a high note when I read this sentence: Let the pizza dough rise for twenty-four hours.

I don’t know how many of you make your own thin crust pizza and wondered why it just isn’t as good as those places in the article, or for the hubster and I, Lombardi’s in Manhattan, and Grimaldi’s at the foot of the Brooklyn Bridge.  I am savvy in the kitchen, but ever since taking a bite of that gooey, chewy deliciousness on an idyllic summer day, I was pretty stumped.  The crust never tasted as good as theirs, never had that wonderful texture.  Then that sentence jumped off the page, and I had it.  The secret wasn’t in the yeast or the flour or the water.  It was all about time.  Give it time. So, the day before you want your pizza, make your favorite dough.  Punch it down the next morning and let it rise again, until the oven is smoking hot (we put ours at 500) and your ingredients are ready.  Then wait for the magic moment when you slide that bad boy out of the oven and you take your first bite.  Heaven. 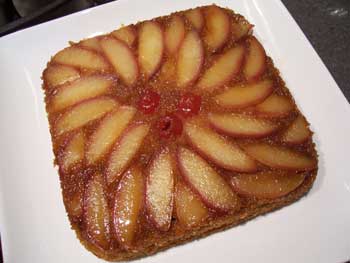 Though we didn’t follow our pizza with dessert – we were too full of cheese for that, I am following my thoughts on it with this delicious upside down cake.  There is a restaurant in town, which shall remain nameless, that actually has the gall to put instant butterscotch pudding as the brown sugar and butter layer.  Words cannot describe the horror of my first bite.  This is not cake; it is a travesty.  This recipe is the real deal, and, to be honest, it is probably easier and cheaper than buying that instant stuff, seriously.  You can make it with pineapple, peaches, apricots, nectarines, plums, or apples.  It’s really hard to go wrong.

1/4 cup butter, grated with the small holes of a cheese grater

Preheat oven to 350.  Melt two tablespoons of butter and 1/3 cup brown sugar in a small saucepan.  Add the water and stir until combined.  Pour into an ungreased 8″ square pan. Carefully arrange your fruit in a pretty pattern over the syrup.

In a medium mixing bowl, stir together the flour, sugar, and baking powder.  Add the milk, butter, egg, and vanilla.  Stir until combined.  Spoon the batter over the fruit in the prepared pan.

Bake for 30-35 minutes, or until a toothpick inserted in the center comes out clean.  Cool for five minutes.  Run a knife around the edge of the pan to loosen, and invert onto a plate.  This is best served warm.

When I called the hubster down to have some cake, he said, “Wow!  That’s pretty.  Did you take a picture?”  This coming from the guy who likes to tease, “Um can I eat, or do I have to wait for the camera?”

Biking for Pancakes and Sunshine 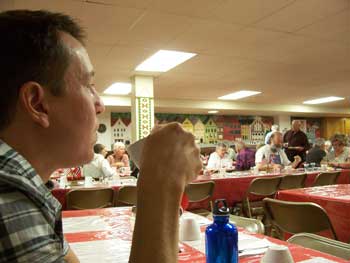 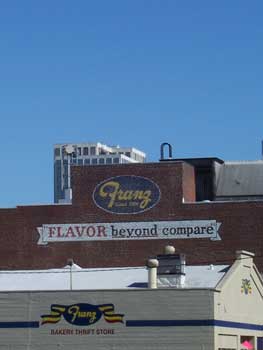 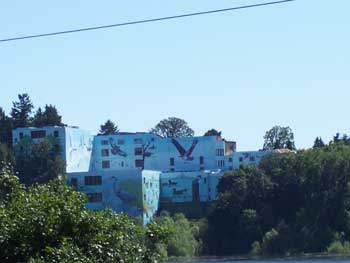 I’d like to start with a shout out to our fabulous neighborhood newspaper, The Southeast Examiner.  It’s a neat publication of, as you would imagine, all things local.  It’s always worthy of an afternoon.  One of my favorite sections has listings of fun activities in the area.  Without it, we would not be here today, or, for that matter, out at that fine square dance, for both were found there.    I also scored a 10% off coupon for one of our favorite wine shops Mt. Tabor Fine Wine, getting a delicious Toro Albala 1982 PX Sherry.  We had a glass at Genoa (a phenomenal meal in celebration of our 17th(!) wedding anniversary a few weeks back) and liked it so much that a bottle had to be procured.  Unlike any other sherry I’ve tried, it’s very dark, starts out tasting like a port but finishes like a sherry.  Delicious.

Anyhoo, to today’s topic.  Last Sunday, when the weather was utterly fine, unlike the steady drizzle of today (good for pulling weeds and spreading bark mulch, however), we got up early and rode our bicycles to the Viking Pancake Breakfast.  It’s been listed in the Examiner for ages but this was our first time giving it a try. It’s located in the basement of the Norse Hall (no surprise there, I hope), a fine building erected in the late 1920’s.

It’s kitschy and lovely and filled with sweet people of all ages noshing on crepe-like pancakes with berry compote, the breakfast links of my childhood, fresh strawberries and cantaloupe, orange juice, and a bottomless cup of coffee or tea, if you so choose, all for $6.  We loved every bite and moment.  One of the highlights was the cute gentleman serving coffee and telling joke after joke about a funny couple named Helga and Olaf.  We’ll definitely be back and maybe upstairs, too.  They also have dances!  Square dances sometimes.  Yippee!

After all of that eating and drinking, and because it was so lovely out, we took full advantage of the weather, riding south on the Esplanade and Springwater trail to Sellwood, then back north, and home.  It really could not have been a finer day.