You are currently browsing the daily archive for May 8, 2009. 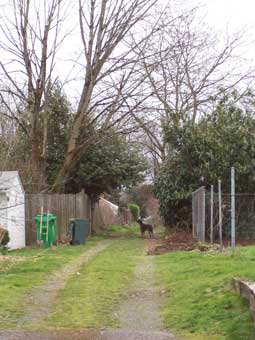 When I was little, my dad got an iron on transfer for St. Pauli Girl beer with the purchase of a six pack.  It had the ubiquitous beautiful blonde holding up two beers and said, “You never forget your first girl.”  I was too young at the time to know what this meant, but it’s always stuck with me, especially about the firsts.

The other day I was in the car when “Late in the Evening” by Paul Simon came on the radio and with it, a certain cohesion of elements – the Saint Pauli Girl and music, for “Late in the Evening” was the very first 45 I bought with my own money and played, rather proudly, on my Mickey Mouse Record Player.  I was nine years old and have never forgotten it.  It is a toe tapping, dance till you’re sweaty kind of song, filled with adult references that I didn’t understand at the time.

Three years later, I bought Robert Plant’s Principle of Moments album at Sweets Records and Tapes at the Target Shopping Center at 80th and Wadsworth.  I remember Danny, the odd man who ran the place (and now is a purveyor of books in the same shopping center, different location), asking me what the picture on the album cover meant.  I was twelve, prone to fits of shyness and embarassment and really just wanted to hear “Big Log” whenever I wanted and not be at the whim of the radio or certain record store clerks, and shrugged, cheeks crimson, “I don’t know.”  He looked at me with disdain, and very nearly didn’t let me buy the album, before saying, “It’s THE principle of moments!”  “Um okay, can I take it home now?”  I enjoyed, at my leisure, some good, but what now sounds like very 80’s music.

When the new and revolutionary technology of CD’s came into the fore, and I bought my first player in 1990, I went back in time with my first musical selection, also from Sweets and thankfully, without hassle from Danny.  I got Elton John’s Greatest Hits.  It still gets air time around here.  The hubster and I both love him!

I think we were among the last people we knew to buy an I-Pod.  Our system of CD’s was working pretty well.  Now, as with many gadgets technological, it’s hard to imagine what we’d do without it.  Anyhoo, the first song I bought was The White Stripes “Seven Nation Army.”  Unlike the Paul Simon of my youth, it isn’t quite dance-able, but it does have Jack White’s stellar voice and an awesome drum beat.

Also, about the picture.  I didn’t feel like putting up each of the album covers, so this is a random dog spotted out walking one day.  Its title could be “First Squirrel.”