You are currently browsing the daily archive for July 18, 2008. 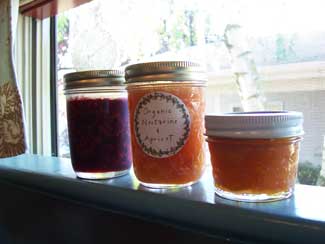 I’ve spent a lot of time in the kitchen over the past few days.  With such an abundance of delicious produce available at New Seasons, I went a little gonzo and made two kinds of jam: mixed berry and nectarine-apricot.  I saw the No Sugar Necessary version of Ball’s Pectin and the old reliable Sure Jell and tried one of each.  I definitely preferred the former, as it actually allows you to choose exactly how much sugar you use.  I used 1 1/3 cups in addition to some apple juice, and the end product was perfection.  The Sure Jell made a great jam, but it is really sweet in comparison, using a whopping three cups of sugar for the same amount of fruit. 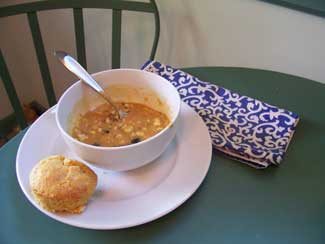 As for the chowder, we had something like this while staying at Ojo Caliente.  They have a nice restaurant at the hotel with some great local cuisine as well as some odd choices, like Northwestern Salmon, hmmm…

I don’t really use recipes, making it up as I go along, so here is the approximate version.

2 ears corn, kernels cut away from the cob

Roast peppers and corn at 400 degrees until golden brown, stirring and turning, so everything browns evenly, about 20 minutes.  Meanwhile, saute the pasilla, onion, and garlic in olive oil until browned.   Peel and chop peppers when they are cool enough to handle.  Add to onion and garlic mixture.  Stir in chicken broth.

Mix dry ingredients together, then whisk into milk and whipping cream.  Pour over corn and pepper mixture, stirring vigorously to avoid lumps.  Bring to gentle boil, then simmer for 20 minutes to allow flavors to develop.

This tastes great with corn bread.  I have tried and failed at many recipes, so I recommend using the Jiffy corn bread mix.  Even though it isn’t organic (something I usually strive for), I’ve found nothing beats it, and it is super cheap.  Add some grated pepper jack cheese, freshly ground black pepper or chile powder, and you are good to go.  Muy delicioso!