You are currently browsing the daily archive for July 19, 2008. 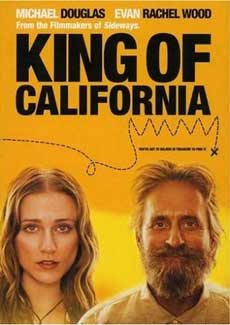 Do you ever get that feeling after watching a movie, like you’ve just witnessed something so wonderful that it fills you with giddiness?

That’s precisely how I am feeling right now, after viewing King of California.  Michael Douglas and Evan Rachel Wood star as Charlie and Miranda in this kooky film about a bi-polar father and his daughter.  Upon being released from a mental institution, Charlie purchases a GPS system and follows what he believes to be the trail of a treasure lost in 1624.

After having a rather unconventional childhood, Miranda is none too pleased to have him home again and with a new obsession to boot.  In his absence, she enjoyed a degree of calm and normalcy previously unknown to her.  Though she is only a teenager, she’s purchased a car and kept up with the bills, all while working at McDonald’s.

In the beginning, Miranda struggles to keep the family afloat with Charlie’s spending and lack of a job, constantly battling him in his quest, and wishing for better days, until, there is that shift, where the impossible seems possible.

It is a thoughtful, sweet, and hilarious film about forgiveness, love, and finding a purpose in life.