You are currently browsing the daily archive for November 13, 2009. 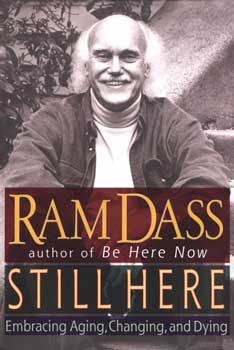 I’m sitting in bed as I write this.  For one, if you recall, I don’t turn the heat on during the day, so it is rather cozy under the covers.  Two, I had my second chiropractic appointment yesterday, with my very first adjustment.  She made two quick pops of my spine.  My eyes were closed, and at the precise moment of the pops I saw a swirl of color, a vivid purple and yellow.  It was so dreamy and peaceful that it made me wonder why I ever feared this event.  She finished with some work on a very tenaciously stuck muscle – pushing, pulling, twisting.  It wore me out (but not the muscle – for the time being, it remains determined to stay in a tight knot), and now I am quite sore in the right upper flank of my back and contemplating a very light row in the basement after I’m finished with this post.

Which brings me to the book Still Here.  I was a very independent and conscientious kid, so much so that I was treated like an adult long before the time I actually was, giving advice, helping out.  I felt a certain measure of pride (I can do it by myself!), though sometimes a bit of anger, too, sometimes I just wanted to be a kid.  In any case, I got this sense that I with my will and determination, I could fix any problem, and, for the most part I did, and do.

Fortunately, the universe presents us with opportunities to learn, grow, and change, at the precise moment we need it, delivered via the ego crushing realizations that we are not in absolute control.  For me, it came with my surgery and, more recently, the fact that my back hurt nearly all the time, and I couldn’t move my arm upon waking in the morning.  For Ram Dass, his opportunity came when he was writing a book on aging, how to embrace it and the changes it brings, including death.  He was near completion but having a difficult time with the last chapter.  Then came a stroke (where he nearly died himself), and everything he had imagined or experienced from the outside became his own path: illuminated via paralysis, physical pain, the loss of words and the slowing of his speech, and, ultimately, the loss of his independence.   The book took on a whole new meaning because he became an “incarnation of wisdom” rather than a “wise elder.”

I really appreciated the book’s honest approach to this life and these bodies that eventually fade.  As Jim Morrison famously sang, “No one here gets out alive.”  Why deny that?  Why also deny that for most illnesses, we are never truly cured, only healed.  Our bodies and minds rarely go back to precisely what they were before.  His aphasia will likely never fade, nor will he ever play golf or be able to drive again.  I shall never have a uterus, right ovary, or fallopian tubes.   This need not be soul crushing, too.  Aging, illness, and the changing of roles take away the distractions of our ego and bring us closer to all that is precious in life. “That’s the ultimate in healing – “making whole” – because there’s no longer anything left out, including the sickness.”

As well, Ram Dass speaks of this process and how it provides the chance to receive help and love.  “The stroke created more love than I had ever seen before.  Even people who don’t like me sent me their good wishes!”  I could not agree more.  I can’t fix all that ails me.  I need the help of professionals and friends.  Thankfully, I opened myself to receiving it or would have missed out on some pretty wonderful experiences.  Shortly after my surgery, I was returning a bowl to my neighbor’s house.  She had fixed us a delicious meal to help us through.  It was one of those impossibly hot days of summer, over 100 degrees, and I made it to her house just fine, giving the bowl to her daughter, Maren.  Then, despite the fact I had only walked across the street, I nearly fainted from fatigue, and knew I needed help getting back home.  Maren held me tightly, and we walked across the street together.  In that moment, I felt so overwhelmed with love, kindness, and gratitude, as if I were being carried by grace.  This feeling was to return again and again throughout my recovery with the delivery of a meal, flowers, the washing of dishes, or a phone call.

Thanks to my own journey, and the help of this book, I see it ever more clearly.  Change (big and small) can be as natural as breathing, something to be embraced and experienced fully rather than feared.  Ride the roller coaster, but like a child – with wonder, anticipation, and exhilaration, the cherished help of friends (and good doctors), closing in on the divine.