You are currently browsing the daily archive for November 18, 2009. 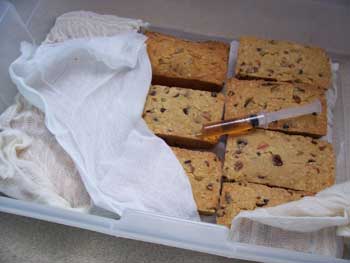 Hi there.  It’s fruitcake season in Under a Red Roof country, but don’t all of you holler in excitement at once, we might lose a bulb!  Just kidding.  Seriously though, if you’ve ever had really good fruitcake, you’d probably be as excited as I am.  I love fruitcake.  Well, to be more precise, I love my fruitcake, as I have yet to eat any others that warranted admiration.  I remember the first time I tried it.  It was at Grandma Tess’s house.  On a beautiful tray of sweets (my family, especially my mom, did amazing things with flour, butter, and sugar when I was a kid, and not just at Christmas) were slices of cake so beautiful as to be kaleidoscopic.  I put a piece on my plate, along with susperos, fudge, Holiday Cake, Peanut Brittle, and Christmas Crescents.  I took one bite of the fruitcake and thought I might die from disgust.  It was utterly saturated with booze, maybe whiskey (my appreciation came much later), and had an awful spongy texture, not to mention the weird, otherworldly “fruits” studding it.  How could it be?  It looked so beautiful and inviting to actually be so wicked.  Thank goodness for the other sweets on my plate and a bit of eggnog to get rid of the hell in my mouth.  As you might imagine, I swore it off from that point.  It turned out that Johnny Carson was right.  I just didn’t get the joke until I ate it.

Thankfully, Martha Stewart had an article on fruitcakes and their ultimate worthiness, gosh, maybe it was ten years ago?  I don’t remember.  She described, nearly to the letter, the awful experience I’d had years earlier and why, if I made her cakes, that all would be fine.  And it was.  I’ve made these variations nearly every year since, pleasing many non-believers (including the hubster) in the process.  These are dense, moist, and rich cakes, allowed to bathe in sherry, rum, or brandy for a month’s time, before being slowly devoured, slice by slice, with a nice cup of hot tea.  They are so worth the time and care.

1 1/2 pounds candied citrus peel (look for the tubs in the produce section) I use one each of orange, lemon, and citron

zest of 1 lemon and 1 orange

Preheat oven to 300 degrees.  Grease six mini-loaf pans.  Cream together the butter and sugar until fluffy.  Add eggs, one at a time.  Stir in vanilla, sherry, and citrus zest.  Add flour, one cup at a time, just until blended.  Add candied citrus and almonds, mix well to combine.  Divide batter between prepared pans.  Bake until golden and a skewer comes out clean, about 1 hour fifteen minutes.  Douse each cake with 1 tablespoon of sherry and allow to cool.  Remove from pans.  As you can see in the photo, I use a large plastic tub that slides under the bed (you’ll need to store them in a cool, dark place) and line the bottom with cheesecloth, place the cakes, and then use another layer of cheesecloth over the top.  Of course, you can use any configuration you like, but this has been the most efficient for me.  Douse each cake with another tablespoon of sherry once a week for the next month.  The syringe pictured is ever so helpful in this endeavor.  The people at the pharmacy were kind enough to give it to me for free.  It keeps measurements precise and the the precious liquor from going anywhere but on the cakes, though a steady hand and a measuring spoon work pretty well, too.

1 pound mixed dried fruit – I use cherries, cranberries, golden raisins, blueberries, and apricots.   Whatever fruits you choose, keep them at about the same size, dicing apricots or pineapple, so as not to overwhelm the flavors of the other fruits.  As the hubster would tease me – it is all about even distribution!

3 tablespoons brandy or dark rum, plus more for dousing

The directions here are pretty much identical, just sift the baking powder and flour together, mixing the rest of the ingredients (but no zest this time) and baking, dousing, and storing as you would for the sherried version.  Hopefully you’ll give them a try.  They really are worth it.