You are currently browsing the daily archive for November 27, 2009. 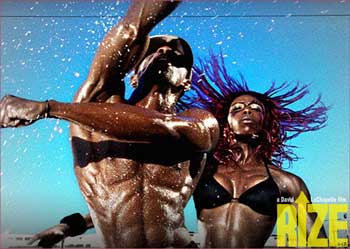 “We’re not gonna be clones of the commercial hip-hop world because that’s been seen for so many years.  Somebody’s waitin’ on something different,  another generation of kids with morals and values.  They won’t need what’s being commercialized or tailor-made for them…custom-made, because I feel that we’re custom-made.  And we’re of more value than any piece of jewelry or any car or any big house that anybody could buy.”   Though the quotation is from Tiger Eyez, all of the young people in this moving and fascinating documentary film from David LaChapelle represent his beliefs.  These are young people literally dancing for change in a place filled with violence, irreverence, and complacency.  The place they call home.

That fact really rung out for me.  Home.  Though we never had much money growing up, we always had enough.  We also lived in a neighborhood that was mostly free of violence and crime, as well.  I can only imagine what it would be like to have home be a place where I worry about getting enough (of anything) or that I am mistaken for another person and shot dead on a street corner.  What would I do?

For the people in the film, they act out their frustrations through Krumping (Kingdom Radically Uplifted Mighty Praise) or Clowning.  It is dance, freestyle moves of exuberance and exaggeration, pumping and popping with incredible skill and speed (I don’t think I’ve ever seen bodies move so fast!).  It is not only a vehicle to escape gang life, but a meaningful way to express, via often harsh hyper kinetic movements, their anger with the world.

It is a wonderful film about the ways we can choose to uplift, not only ourselves, but the those around us via positive beliefs and actions, with dance as the dazzling centerpiece.