You are currently browsing the daily archive for September 5, 2008.

A Moment of Forever 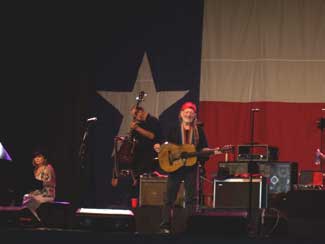 Sometimes it is really difficult for me to put my feelings into words because they feel so inadequate or they just seem silly, and in this case, both.  I do not tend to get starry eyed about celebrities.  Yes, I do find them interesting, as I do all people, and occasionally get the gossip via magazines, but I know that, ultimately we are all human in the end.   We all eat, sleep, and go to the bathroom every day.

One exception to this rule is this fella here.  Good golly, Gregory and I were so darned excited to see him last week at the Oregon State Fair.  I mean, the guy’s done so much – Farm Aid, Bio-Fuel, and all that singing!  When we first arrived and perused the various sites, we’d look at each other and ask, “Do you think he’s here?”  Then, after we’d seen the Honeysuckle Rose and knew he was, indeed, at the Fair, we wondered aloud, “What do you think he’s doing now?”  And then, when we finally got to take our seats and his roadie brought out Trigger, we just about burst.  “Willie Nelson is back stage and he’s gonna sing – for us!” 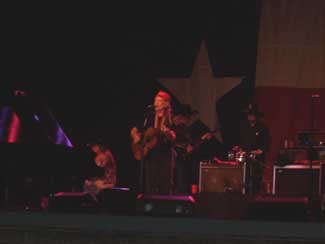 Well, my friends, he did not disappoint.  The man, who is seventy-five, played for an hour and forty-five minutes without stopping.  When the band played “Bloody Mary Morning,” I thought old Trigger might break at the seams.   Willie was strumming so wildly, and me, right there with him, whoopin’ and hollerin’, hands drumming on my thighs, feet stomping to the pulsing beat.  Hot damn, he is good!  Sometimes, he didn’t even finish a song before starting the melody for another.  The man was on fire.

He played old favorites, like “Whiskey River,” “Crazy, ” and “On the Road Again,” and new songs, like “You Don’t Think I’m Funny Anymore,” and “Over You Again.”   Of course he played “Georgia,” and of course, I cried, but sweetly, because the night was so magical there in Salem.  Big clouds threatened us and a cool breeze blew, but the sky turned starry, and the people were so kind, happy as clams to be in the presence of this sweet, generous, and funny man.  Oh Willie, it was a delight to spend a “Moment of Forever” with you.