You are currently browsing the daily archive for September 19, 2008. 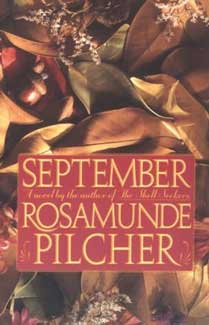 I am a pretty voracious reader who is not terribly concerned about genre.  I will read about any topic, fiction or non, as long as it is well crafted and holds my interest.  With a few exceptions, I do not tend to read multiple books from one author.

Today’s post illustrates one of these exceptions.  Two of my favorite books of all time are from the Scottish author Rosamunde Pilcher.  The Shell Seekers, which I posted about early in my blogging days, and September, the subject of today’s Spotlight.  Though it is not a sequel to The Shell Seekers, they are rather good read one after the other, having one character in common.

September actually begins in May in various places around the world, painting a detailed portrait of very diverse characters and their inward and outward journeys to one rather lavish dance in the Scottish countryside. The story centers around the widowed Vi, and radiates to include her friends, family, neighbors, current and former servants, and mere acquaintances.

It is a modern tale, steeped with fun, the remnants of old wounds, family secrets, and the everyday goings on of a diverse cast of characters.  It’s the kind of book that will entertain, give a little education (from Scottish Reels to the IRA) and keep you guessing until the end.

Much like the Shell Seekers, though not quite as good, in my opinion, September is a realistic portrait of imperfect people as they move through life – loving, learning, and making mistakes.